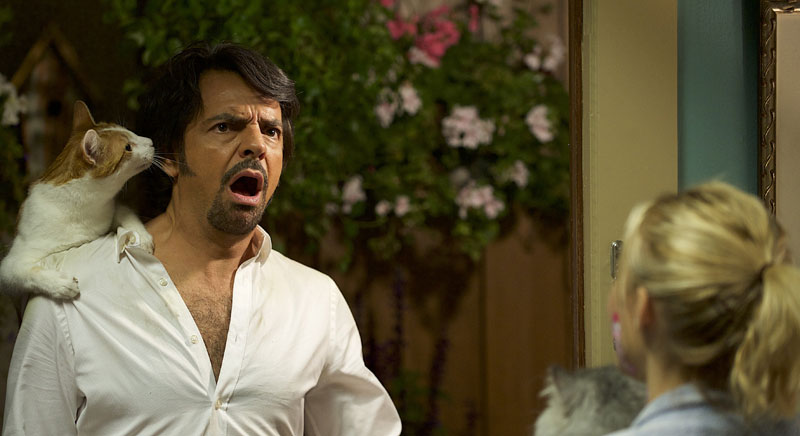 How to Be a Latin Lover

In 2013, Mexican comedy superstar Eugenio Derbez wrote, directed, and starred in the international hit Instructions Not Included, which is reported to be the highest grossing Spanish-language film in U.S. history. Looking to consolidate his crossover success, Derbez is back with the new comedy How to Be a Latin Lover, which is designed for maximum popularity with audiences on both sides of the Rio Grande. But given the deep bench of American talent co-starring in the film, as well as its California shooting locations and the majority of its dialogue being spoken in English, it’s clear that with this film Derbez is swinging for the American side of the border, where there’s little doubt that this comedy will, at least, get on base.

How to Be a Latin Lover, the story of a gigolo, is a study in contrasts: It’s both sentimental and funny. The opening sequence offers a good sense of what we’re in for. Two young children reflect on their perfect lives with mama and papa and their rural isolation to a point at which their sappy dialogue is hardly bearable a minute longer. Then a wonderfully funny (yet tragic) sight gag occurs from out of left field (quite literally), and you realize we’ve been set up for a very good laugh. Ken Marino, of Childrens Hospital, The State, and Bad Milo, is a perfect director for this material, given his proven penchant for awkward humor. After that opening prologue, Latin Lover skips ahead a couple of decades, to show us the story of Maximo (Derbez) and how he has fulfilled his childhood desire of living the good life as a paid gigolo. Maximo’s constant prowl for rich old women provides juicy roles for actresses we haven’t seen much of in the movies of late: Renée Taylor, Linda Lavin, and Raquel Welch (and anyone who recalls Welch’s guest appearance on an episode of Seinfeld, in which her arm-swinging becomes a central plot point, will find extra resonance in her character’s comic twist in Latin Lover).

The humor is both broad and lowbrow, yet often extremely funny. Reconnecting in Los Angeles with his now-grown sister Sara (Hayek, clearly having fun acting with Derbez, as if they were back in the Mexican soap operas where they both made their bones), Maximo eventually learns how to be an uncle to Sara’s adorable son Hugo (Alejandro), who provides fodder for most of the movie’s heart. Kristen Bell plays a character who’s a genuine, if ridiculous, kook, and Rob Riggle and Rob Huebel also play comical nutjobs. Meanwhile, Maximo’s fellow tribe of gigolos is played with great cynicism by Rob Lowe and Michael Cera. How to Be a Latin Lover is rude, randy (particularly among the older women), and heartwarmingly cute. As one of the gigolos says, “Once you lower your expectations, the sky’s the limit.”