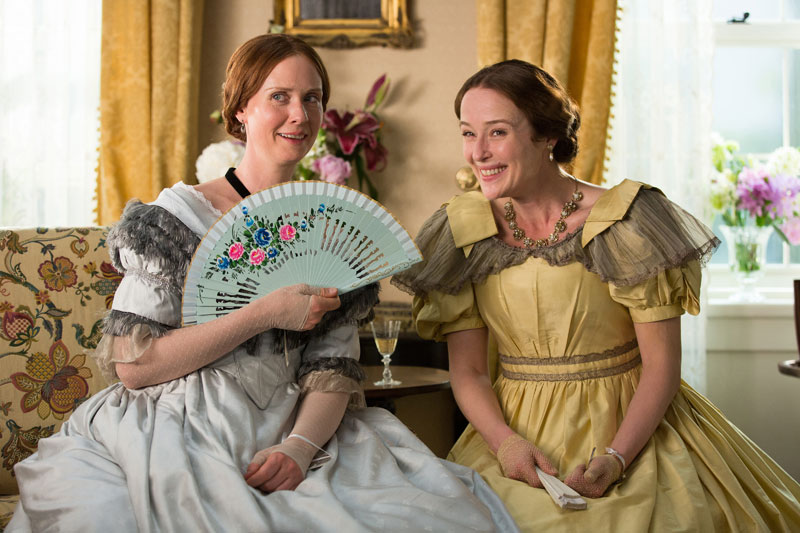 Was Emily Dickinson’s home life – to which the poet restricted herself in the last years of her life – a comfort or a curse? A masterful early scene in British filmmaker Terence Davies’ biographical sketch suggests it was a little bit of both. The camera starts on Emily (Bell), in her late teens, as she fondly looks around the family drawing room. The camera slowly sweeps 360 degrees, or the circumference of a clock, revealing what Emily sees: the kerosene lamps, the crackling fireplace, her sister bent over needlepoint, her mother gazing mournfully into the distance, and other family members in various states of industry and boredom. The camera concludes on Emily again, her face now stricken. Are the walls closing in, or is that a trick of the lamplight? Did she shudder at the sound of the clock chiming? Soon after, as the Dickinson family all sit for daguerreotype portraits, Davies uses a seamless bit of digital wizardry to transition his young actors into their older counterparts. The effect of these two scenes together is powerfully demonstrative – of how the days can move so slowly, and whole years fly by in a blink.

Davies’ novel approach to communicating time’s passage isn’t always so elegant; the looming Civil War is introduced in a scene that goes from zero to 60, and the war itself is dispatched mawkishly in a series of full-color stills of carnage and the American flag, the worse for wear, flapping in the wind. And so subtly conveyed are the more dramatic transitions in a confined life that Dickinson novitiates might not immediately grasp their importance – of Emily’s permanent switch to wearing white all the time, or of a growing reclusiveness that eventually manifests in a reluctance to leave even her room. Still, that late dawning on the viewer is itself a mimic of the way a quirk can turn to habit and harden in our lives.

The director of such literary adaptations as Sunset Song, The Deep Blue Sea, and The House of Mirth, Davies continues to feel right at home with the period piece (although this era is especially severe – in clothing and hair, the limits to what women can do, the amount of discussion over the soul’s chances at eternal damnation), and with gifting a great role to an actress. Emily is played as an adult by the perfectly cast Cynthia Nixon; her journey from feistiness to embitterment is uneasy to watch, and her end-of-life seizures downright gruesome. Jennifer Ehle is also deeply moving as her devoted sister Vinnie, as is Keith Carradine, born to wear muttonchops, as her father, but some of the other actors struggle with the formal dialogue and a convincing American accent. A Quiet Passion’s manneredness overwhelmed me at times, but it is very effective – chilling, even – in its charting of one woman’s disappointed journey to the rhetorical coda of her own life: “Why has the world become so ugly?” 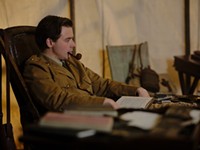