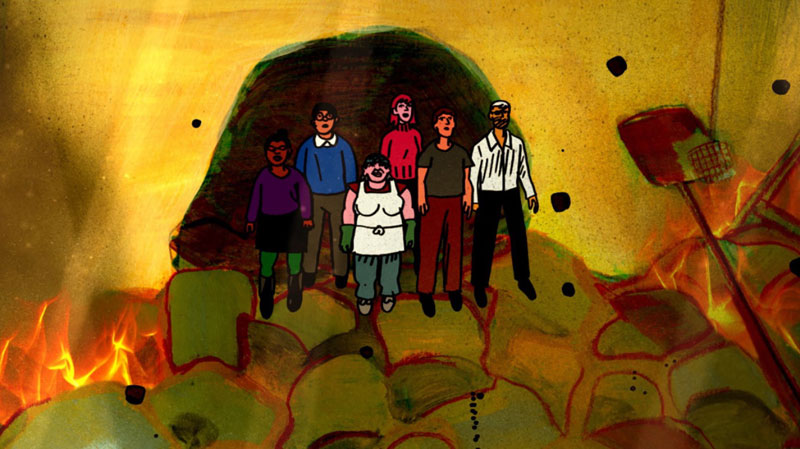 My Entire High School Sinking Into the Sea

To the Nineties kids who miss MTV’s Liquid Television, those of you scarred by high school, and anyone who thinks James Cameron’s Titanic could’ve used more sharks, good news: Comic book artist/writer-turned-writer/director Dash Shaw has created a stunning debut with My Entire High School Sinking Into the Sea.

Shaw’s graphic novels have won the hearts of nerdom and fancy pants literary critics alike. (NPR called his graphic novel New School a “Best Book of 2013.”) And there’s plenty for people of all walks to love about his first feature film, too. The film blends aspects of the artsy, autobio, indie comic with the best parts of the super hero genre as it tells the tale of two best friends, Dash (Schwartzman) and Assaf (Watts). They have to save each other and their classmates from a watery grave after a minor earthquake sends their woefully out-of-code high school off a cliff and out to sea. As they struggle to get out of the bowels of the school and up to the roof for rescue, they have to work out their issues (they’ve been suffering creative differences as co-authors of the school paper) and learn what it means to be a friend.

The film feels like the spirit of a zine come alive – with a few over-the-top, Muppet-esque explosions. It’s drawn entirely by hand, with abstract color blocks layered under the art. The effect is a super-fun, bananas-weird tale about high school friendships and insecurities animated with collage, line art, paint, Sixties liquid-light effects, and realistic botanical and animal sketches. Every few seconds the film produces a new visually stunning scene laden with background jokes. (Think Bob’s Burgers’ signage puns or BoJack Horseman’s animal jokes.) With so much happening visually, it would be easy to lose the narrative dialogue, but Shaw keeps it center stage. Plus, several of our forever-crushes serve as voice talent: Schwartzman and Watts are joined by Maya Rudolph, Lena Dunham, John Cameron Mitchell, and Susan Sarandon (as the ass-kicking Lunch Lady Lorraine). The film ranges from hilariously gory shark attacks to meta sequences in which the characters narrate their own film, and yet manages to remain cohesive. Its pre-screening seizure warning is no joke though. Prepare for some amazing but brain-melting animation.

A version of this review ran online as part of our 2016 Fantastic Fest coverage.

My Entire High School Sinking Into the Sea, Dash Shaw