The ethical dilemma faced by the middle-age father in the Romanian drama Graduation is a prickly one: How far would you be willing to bend the rules to give your child a better life than the one you’ve had? Set in a bleak Transylvanian community shrouded by the fog of dead-end dreams, the film centers on an otherwise honorable physician, Romeo Aldea (Titieni), who compromises his integrity after his teenage daughter Eliza (Dragus) is assaulted on the eve of her final exams. Fearing the traumatic near-rape experience will negatively affect Eliza’s test performance and derail her chance to receive a scholarship to an English university – the ticket to a future more promising than anything her native country could offer – the good doctor greases certain palms to ensure a successful exam score and becomes, much to his resignation (and paranoia), yet another complicit participant in the network of corruption that pervades day-to-day life in small-town Romania. Having returned to his homeland after the fall of Communism in the early Nineties, only to later regret his decision, Dr. Aldea’s actions are purely motivated by a desire bordering on obsession to see his daughter escape the dismal world to which she was born. But if those same actions in turn tarnish Eliza’s honor and possibly implicate her in the commission of what nevertheless remains a crime, at what price does a father’s love come?

Mungiu shared the award for Best Director at last year’s Cannes Film Festival for Graduation, though the film has nowhere near the gut-punch of his 2007 feature, 4 Months, 3 Weeks and 2 Days, a drama about an illegal abortion set in the waning days of Ceausescu’s dictatorial government. Here, he favors scenes lasting as long as five minutes or more, usually framing Romeo and another character (his dazed daughter, depressed estranged wife, weary mistress) in a two-shot in which they appear in diametric confrontation with each other. It’s a deft directorial choice that keeps the movie on constant edge, consistent with its protagonist’s state of mind. The unresolved mystery of the sexual attack adds to the tension, along with a couple of windows shattered by intentionally thrown rocks, but those narrative threads ultimately feel like red herrings begging for a purpose other than to simply evoke an atmosphere of fear. They’re forgivable distractions in this solid, if not exemplary, tale about the morally gray choices we sometimes make when faced with a situation that’s anything but black and white, especially when loved ones are involved. Graduation may not occupy a place at the top of the class of contemporary Eastern European cinema like some of Mungiu’s other films, but it definitely sits above the curve. 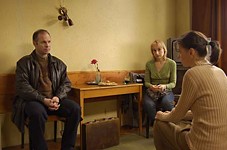 4 Months, 3 Weeks and 2 Days
Obtaining a back-alley abortion in Romania proves to be rivetingly tense in this visually spare but assuredly virtuosic film. 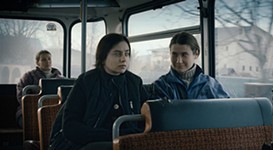