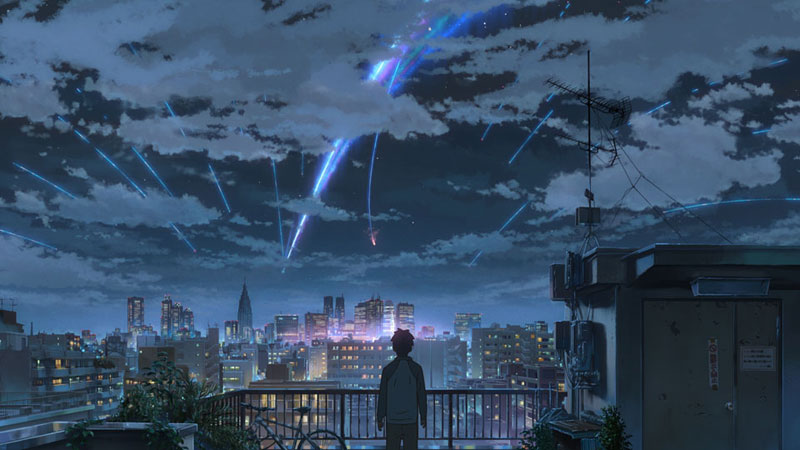 A strand of red ribbon delicately threads through the time-bending Japanese anime romance Your Name, first as a band encircling a young boy’s wrist, then as an adornment in a young girl’s hair, and always as the string that links the past, the present, and the future. It twists and knots, ravels and unravels, connects and converges as the lives of two teenagers, the headstrong Mitsuha and the shy Taki, come together and then apart, again and again, as they strive to make a karmic connection across the fourth dimension of space and time. A bored high school girl stuck in the rural mountain village of Itomori, Mitsuha wishes she were living a more cosmopolitan life, while the similarly aged Taki lives in the shimmering metropolis of Japan’s capital without any singular purpose. The two adolescents seemingly know nothing of the other’s existence, both on the road to a life of quiet desperation.

And then, something astonishing happens one morning: Each wakes up in the other’s body and lives out the day in a confused state, only to awaken the next day with the vague memory of an unsettling dream about a girl, or a boy, who lives in a faraway place, elsewhere in Japan. As friends and family members comment on the pair’s strange day-before behaviors, the body-swap experience intermittently continues until a cosmic lightbulb enlightens the increasingly perplexed adolescents, as both simultaneously grasp the incredible reason for their puzzled frames of mind. Soon, they’re communicating by leaving text messages, calendar entries, and notebook notations for the other to read in defiance of the time/space continuum that separates them physically, and they begin to enrich the other’s life using their alter-ego states in ways neither had ever imagined. Yes, you’ve seen this before in countless comedies like The Change-Up, Freaky Friday, Like Father Like Son, and so on. The switch has become a schtick. But prepare yourself here for something those movies were incapable of delivering. When Taki learns Mitsuha actually died three years before in a horrific natural disaster precipitated by a disintegrating comet that killed half of Itomori’s population without warning, Your Name takes an unexpected turn, and what a turn it is. It transcends the mundane, and becomes more emotionally compelling than any animated movie you’ve seen since Inside Out.

Using sliding doors as a recurring motif to signify its frequent shifts in time (in homage, no doubt, to the 1998 parallel-universe romantic drama of that name), the film requires a degree of patience, particularly in the understandably confusing first half-hour during which Mitsuha and Taki stumble through their waking daydreams. Given its nonlinear structure, Your Name requires your trust, but once you place your faith in screenwriter/director Shinkai’s expert hands, the reward will come. (Not surprisingly, the film is the fourth-highest-grossing film in Japan’s history.) Toward the end of the film, when the twentysomething Taki confides that he feels as if he’s always searching for something, for someone that he can’t name, Your Name resonates with unexpected potency. Most of us know that feeling all too well. Later, as he ascends the concrete stairs of an outdoor walkway, he passes a young woman walking the other way, and both intuitively stop to turn around and look at each other. Dream or destiny? If your heart doesn’t skip a beat then and there, you should see a cardiologist to make sure you have one. 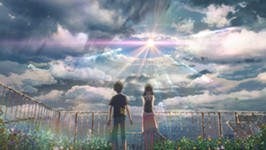