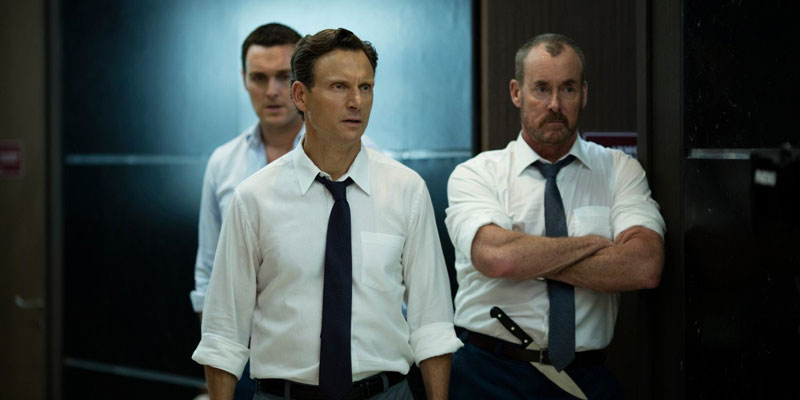 Corporate cubicle office life demeans the worker and too often makes for a soul-deadening experience for employees at all levels, from mail room to midlevel management. Even those at the top of the corporate ladder tend to see their moral compasses go haywire in this new age of Corporations = People. Written by Guardians of the Galaxy’s James Gunn and helmed by Wolf Creek’s Greg McLean, The Belko Experiment is a twisted, surreal, and extremely violent “What if?” answer to Mike Judge’s forever classic Office Space. With all those white shirts, all that red blood, this is a Battle Royale for the Dilbert generation.

It begins as just another day at work inside the shiny steel and glass tower of Belko Industries, a Colombian business whose corporate goals are intentionally left vague, but for the 80 non-local workers in the building, it soon becomes apparent that something is awry. For one thing, the guards outside are only letting the American employees in, leaving the workplace disquietingly empty. Then steel shutters slam closed, locking everyone inside – never a good sign – and a voice on the intercom instructs them that the group must select two among them to be killed or the unseen voice will begin killing people randomly. Initially, no one suspects that the chips they’ve had implanted in their necks to “protect” these foreign workers from being kidnapped might not have been such a great idea. But then people’s heads start exploding, Scanners-style, and a very bad day at work for all involved ensues. It’s the Stanford Prison Experiment rewritten for the corporate age in crimson streaks as nihilistic kill-or-be-killed factions break out within Belko.

Gunn’s always been a terrific writer of fully realized characters, and that holds true here. Mike (Gallagher Jr.) is your average 9-to-5 wage slave who ends up being the movie’s relative moral compass alongside his girlfriend Leandra, with Tony Goldwyn’s COO Barry leading the “evil boss” team with cohort Wendell (McGinley). Granted, there’s 80-odd characters to dispatch, so the vast majority are merely fodder for some seriously ghoulish office carnage – by gun, knife, and all manner of office supplies, including a stapler – but Gunn mastered the fine line between gross-out horror and outright horror long ago, so virtually all the carnage is impressively keyed to trigger the audience’s gag reflex with shocked laughter right behind.

No spoilers here, except to say that Belko could easily have been an extended episode of bleak Brit import Black Mirror only with, you know, more exploding craniums. And as a parable about the inherently dehumanizing aspects of the rat race, it’s bloody good fun. 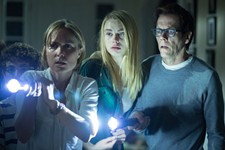 The Darkness
Supernatural horror film from the Blumhouse scare factory 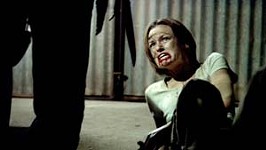 Wolf Creek
Wolf Creek is an accomplished Aussie version of The Texas Chainsaw Massacre; it's also a viscerally told slasher film that manages to do an awful lot with very little.