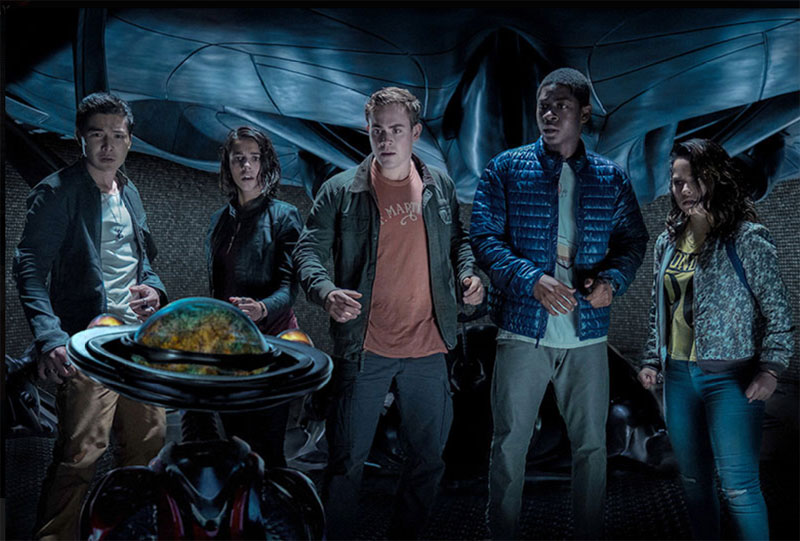 These indomitable, color-coded superhero teens are back on the big screen, starring actors who are too young to have been alive for the last hurrah of the film series in the mid-Nineties yet a smidge too old to pass as genuine high-schoolers. Nevertheless, they’re a likable, capable group who, along with assists from such top-line talents as Elizabeth Banks, Bryan Cranston, and Bill Hader, make this new incarnation of the film series with deep TV roots a reasonably enjoyable, if utterly predictable, romp.

The plot will be recognizable to fans of the Mighty Morphin Power Rangers TV franchise, which was the American version of the Japanese TV series Super Sentai. Outsiders will just find it nonsensical. Sixty-five million years ago, Zordon (Cranston, who earlier in his career, appeared in a couple of episodes of the American TV show) hid the Zeo Crystal, “the source of all life,” from the villain Rita Repulsa (Banks, who delightfully chews gold like others might chew scenery). Dormant for all these millennia, the crystal is rediscovered by a group of kids who gain some super powers from the stone, but must learn to “morph” before realizing the crystal’s ultimate powers. Three-quarters of the film is devoted to their learning curve. The Power Rangers are always a group of misfit kids, and this time they’re no different. Red Ranger Jason (Montgomery) is a quarterback with authority issues; Kimberly, a reforming mean girl, is the Pink Ranger; Blue Ranger Billy is “on the spectrum,” which is the way he introduces himself; Black Ranger Zack is a defiant kid nursing a bedridden mother; and Trini, a misunderstood girl with lesbian desires, is the Yellow Ranger. (Kudos to the filmmakers for creating the multicultural mix of black, Asian, Latina, and female Rangers, a move which is, nevertheless, undercut by making the white, male quarterback the leader of the group.)

For the majority of the film, we get to know these kids (three of whom meet in detention) and observe their training by Zordon, who is now encased in a cave wall, and Zordon’s trusty robot Alpha 5 (voiced by Hader). The convulsive action all takes place in the film’s last quarter. Power Rangers plays something like The Breakfast Club crossed with Transformers (to which this film makes a couple of direct nods). The mayhem decimates the kids’ hometown of Angel Grove as they learn to unite and form a giant MegaZord with their metallic suits to defeat Rita Repulsa, who plunders through the city streets searching with her rock giant Goldar for gold to consume, as well as the Zeo Crystal, which is hidden in a Krispy Kreme. The donut chain’s product placement pays off handsomely in the end. From now on, I fear I will always subliminally think of Krispy Kremes as harbors for the crystalline source of life. Alas, all that shines there is glazed sugar.

Project Almanac
Teens discover plans for a time machine within found footage, but things go awry when they begin to construct it.