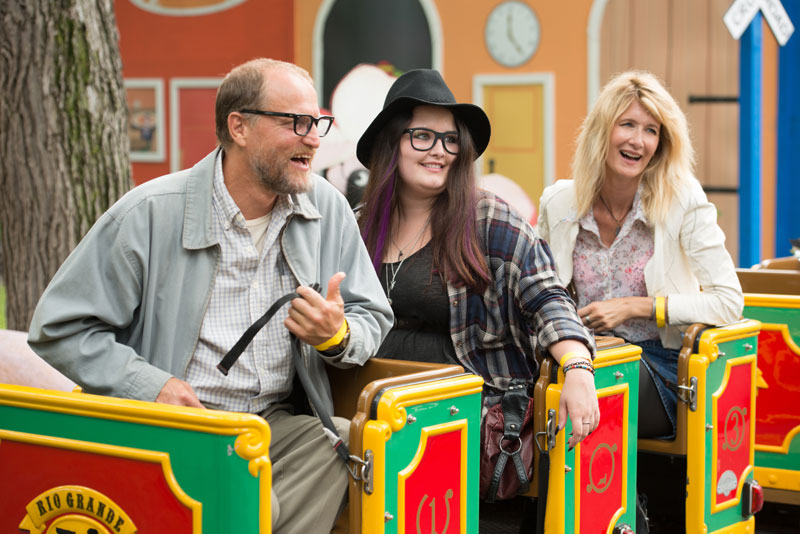 Since the Eighties, artist/writer Daniel Clowes has been mining the mental terrain of the misanthrope, primarily with his comic book series Eightball. Full of cynics, misfits, and social outcasts, Clowes’ voice is angry, unsentimental, and bleak. Director Terry Zwigoff picked up that voice when he adapted Ghost World in 2001, and it is the best adaptation of Clowes’ material to date. Which brings us to Wilson, which is based on his 2010 graphic novel. The screenplay is by the author himself, and as directed by Craig Johnson (The Skeleton Twins), the film ends up neutering Clowes’ rage-against-the-machine characters with rom-com contrivances and an ending that bears little resemblance to the original story.

Surrounded by stacks of yellowed paperbacks and his stalwart companion, an adorable terrier named Pepper, Wilson (Harrelson, uneven) spends his days walking his dog and engaging with strangers in his over-the top, enthusiastic conversation, that ends with him ranting about the crumbling of society. He gets a call that his father is on his deathbed, dying of cancer, and heads out beyond his crummy neighborhood after dropping off Pepper with a dog-sitter (Greer). After his father passes, Wilson loses it, feeling alone and insignificant. He tracks down his ex-wife Pippi (Dern), and she reveals that instead of having an abortion 17 years ago, she gave birth to a daughter, Claire (Amara). Wilson convinces Pippi to track her down, and soon the film becomes a kind of insta-family road trip film before an inexplicable betrayal sends him to prison.

Harrelson is mostly game, channeling a more abrasive version of Harvey Pekar, but time and again, the film pulls its punches or becomes bogged down in cliches. For example: Wilson gets sentenced to three years in a federal penitentiary. He is beaten daily for the first few months when (cue record scratch), he’s high-fiving members of all the various factions; suddenly everyone loves him. Dern is the best thing here, playing a ex-drug addict waitress who is almost as unhinged as Wilson, and Amara is great as the deadpan daughter. But while Wilson the man has no filter between what he thinks and what he says, Wilson the film has opted to insert a rose-colored filter between the source material and the resulting film. The Skeleton Twins
Bill Hader and Kristen Wiig co-star as siblings in this dramatic workout.