This live-action reboot of Walt Disney Studios' watershed 1991 animated film musical inspires both imagination and cynicism. Presented under the auspices of introducing a new generation to yet another version of the enduring 18th-century French fairy tale La Belle et la Bête, the movie brims with unexpected zest, an enthralling joie de vivre that seduces despite any reservations you may have. The thing feels wonderfully alive, as if you were experiencing this oft-told tale for the first time. And yet, beneath the brilliance of its execution, a certain familiarity breeds contempt. This Beauty and the Beast leaves a bit of an aftertaste, a less-than-pleasant sensation of déjà vu after the credits roll. Despite the updating of certain elements of the Disneyfied adaptation of the classic story, which now features a gay supporting character and a much darker third act (the narcissistic Gaston turns out to be a real bad guy), as well as the seamless integration of the enchanted computer-generated residents of the Beast’s castle and the flesh-and-blood Belle and Beast, this is (after all) pretty much the same movie released by the same studio just a little more than a quarter of a century ago, a movie not too different from the stage musical, also produced by the same studio, that played on Broadway for over 13 years and exhaustively toured the country until last year. Listen closely between the full-throated renditions of Alan Menken and Howard Ashman’s recognizable songs, and you may hear the ka-ching! of a cash register. There’s nothing wrong with making money and lots of it, particularly when the endeavor is as well-crafted as this movie, but the shape-shifting nature of this steamrolling franchise somewhat devalues originality, even in an industry seemingly intent on cannibalizing itself most of the time. That said, if Uncle Walt were still alive, he’d undoubtedly approve of this business strategy. After all, the man excelled in milking his now classic animated features for all they were worth. Every grownup baby boomer who visited Disneyland as a kid fondly remembers riding Dumbo the Flying Elephant, Peter Pan’s flight, and other variations on a theme park dreamed up by the movie mogul.

The movie largely succeeds due to the guiding talent of director Bill Condon, who breathed new life into the film version of the already stellar stage show Dreamgirls over a decade ago. Condon has a keen sense of bringing out the best in musical numbers, both in terms of staging and performance. (Remember Jennifer Hudson’s “And I’m Telling You I’m Not Going”? How could you forget it?) As in the 1991 film, the centerpiece number here is “Be Our Guest,” a razzle-dazzler that pops off the screen in a burst of creativity and color, performed by those wonderful animated inanimate objects who feel like old friends: the ever-gracious candelabra Lumière (McGregor, sounding like Maurice Chevalier), the warm and wise teapot Mrs. Potts (Thompson), and the cranky clock Cogsworth (McKellen). Channeling Busby Berkeley, with a passing nod to Gene Kelly, it’s one for the books. As for the titular romantic leads, both Watson and Stevens manage to make the roles their own, despite the many actors who have come before them. By the end, you really want their characters to figure out a way to make it work. Without question, kids and their adults will love this critic-proof movie, regardless of the number of times they’ve already seen it before. It’s gonna make a gazillion dollars. Be my guest! 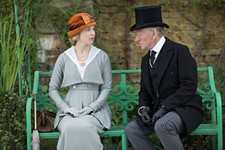