What All Nighter needs is some Neesons, per Key and Peele, but this shaggy-dog story of mucho macho mad dad Frank Gallo (Simmons) searching for his missing daughter Ginnie (Tipton) with the aid of hapless, stoner ex-boyfriend Martin (Hirsch) can’t decide whether it wants to be Taken-lite or a straight-up comedy of mismatched males. (For the record, Liam Neeson is referenced by name several times.) It’s engaging enough fare for Simmons fans – and who isn’t? – but even with the gruff, chiseled Oscar-winner on board as a mysterious man of action, this is pretty lightweight stuff.

Over the course of a day and a night, the pair wander all over Los Angeles in their search for the absent Ginnie, interacting with a quirky cast of cameoing comedians and other L.A. oddballs. Killam and Schaal are among the high points as a manically passive-aggressive couple who attempt to aid Frank and Martin, but as the story moves along and vegan Martin bonds with Frank over Bob Seger and blood-red rare steaks, nothing all that exciting, or even all that wacky, happens. It’s Netflix and chill fodder for sure, but even with its relatively short running time and Simmons’ rampant charisma, All Nighter feels way too much like its own title, a soporific exercise in style over substance. 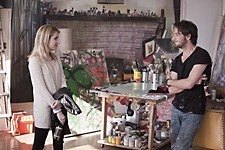 The Art of Getting By
As coming-of-age dramas go, this one is flaccid and endlessly irksome.