You drive me ape, you big gorilla. Of course I’m referring to what Robert Armstrong’s big game hunter Carl Denham referred to as “the eighth wonder of the world” in the 1933 original King Kong, which, to this day, remains unsurpassed in terms of style, substance, and sentimentality. “It was beauty killed the beast,” opined Denham but really it was the machine gun fire from the biplanes that toppled the king from his throne atop the Empire State Building. In Kong: Skull Island, the shaggy hero – and he’s definitely played, via motion capture and millions of dollars of computer graphics, as a hero here, protector of the Asiatic native tribe who resides on the island along with a genuinely nutty World War II navy pilot whose P-51 ditched on the beach way back in 1945. That’s the prologue. Here’s the pitch meeting as I imagine it: “Hey, what if we do Kong as a Vietnam War movie, and have him square off against a squadron of Huey choppers led by a Samuel L. Jackson in over-the-top badass mode? Throw in John Goodman in the old Denham role and, I dunno, maybe Brie Larson, as an anti-war combat photographer? Kinda Fay Wray: Social Justice Warrior-esque? Whaddaya think?”

And presto, there you have the newest iteration of one of cinema’s most enduring behemoths. Featuring enough spectacular, slow-motion action scenes of Kong wrasslin’ with the island’s other toothy critters and swatting helos out of the sky like gnats to give the Tojo’s titanic trifecta of Godzilla, Mothra, and King Ghidorah a run for their combined chaos-causing charisma. There’s no doubt that Kong: Skull Island makes for a swell Saturday afternoon monster matinee, just don’t run to the jungle expecting any real characterization from the human actors in the film (Reilly, who’s a hoot, excepted). The whole of the story – penned by Dan Gilroy, Max Borenstein, and Derek Connolly – is so basic that I’ve already encapsulated it above, but then again, who goes to a giant monster movie looking for nuance and grace? (Okay, yes, Peter Jackson, fair enough.)

Skull Island is nothing like that Kiwi director’s 2005, Depression-Era reboot. This monkey doesn’t have time for romance because he’s too busy ripping the guts out of giant reptiles dubbed “skull crushers” who live in the hollow world below. He’s also pulling hazard pay playing super-sized savior to leading man Hiddleston and company when he’s not actually smushing the guts out of our GI Joes beneath his monstrous foot. This version does not, uh, monkey around when it comes to extreme violence and digital gore, and I was frankly surprised it managed to secure the coveted PG-13 rating.

On the whole, though, Kong: Skull Island is great big dumb fun. It’s also shockingly beautiful to look at when you aren’t having creature guts flung into the camera. Shot on location in northern Vietnam’s famous Ninh Binh province, the real-life scenery is every bit as dazzling as the computer generated 'copter carnage onscreen. If there’s been a better advertisement to visit historic Vietnam, I’ve never seen it, and I’ve been there. 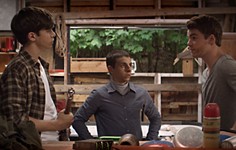 The Kings of Summer
This Sundance favorite is a perfect yet offbeat summer movie about teens who ditch their families and try to live like men in a ground-level treehouse in the woods.