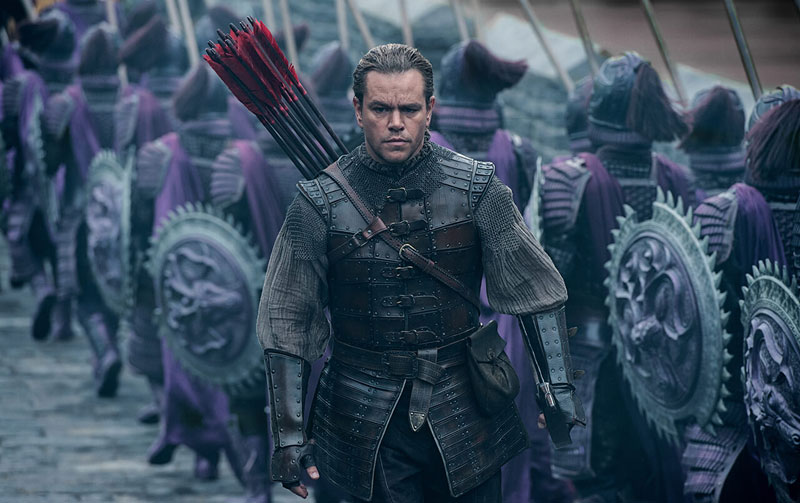 A giant barrier constructed for the purpose of fortifying a border to keep out foreigners may be a loaded premise in these xenophobic times, but no worries: The Great Wall is a soggy popcorn movie without the kernel of a political agenda. Or a kernel of historical accuracy, for that matter. The strange invaders in Chinese director Yimou Zhang’s fantasy action film set sometime around the 12th century aren’t your typical Mongolian hordes, but rather (spoiler alert!) monstrous extraterrestrials resembling reptilian hyenas with skin the color of Day-Glo green relish. Having crash-landed on Earth two millennia ago, these nasty aliens, led by a man-hungry queen (literally) rise up every 60 years on an inexplicable mission to punish humanity for its greed. (They appear to be okay with the remaining six deadly sins.) Of course, everything has its Kryptonite, in this case a magnetic ore that can temporarily pacify the beasts’ lethal urges. Zhang stages the battle scenes between the Chinese warriors and the otherworldly trespassers with a balletic sense of pageantry (the cobalt blue-clad female archers bungee jumping from the Wall’s turrets are breathtaking), but the esteemed filmmaker of such masterworks as Raise the Red Lantern, To Live, and Hero seems hobbled by the genre-bending narrative. What might have been weirdly compelling instead feels barely a cut above an L. Ron Hubbard science-fiction novel.

As the European mercenary trader searching northern Asia for a mysterious “black powder” with the power to revolutionize warfare, Damon appears disengaged through much of the film, seemingly reluctant to step into the boots of the white-guy savior (sorta) who helps his new comrades fend off their savage nemesis. It’s hard to say what’s more distracting here: the actor’s lackadaisical commitment to the role or the ratty extensions in his hair. Damon is usually a reliable (and often fine) actor, but The Great Wall doesn’t appear to be his cup of tea. Even the Butch Cassidy/Sundance Kid bantering with his Latin sidekick (Chilean actor Pascal) – something you’d think Damon could do in his sleep – lacks the typical vitality. Whether it’s a case of miscasting is unclear, but without a willing hero to anchor this already dubious movie from start to finish, The Great Wall hits a brick wall.