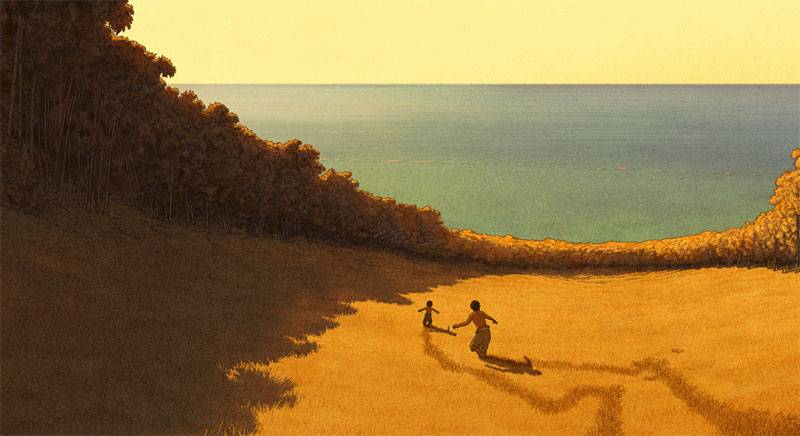 The simple story told in the near-wordless animated feature film The Red Turtle is almost biblical. Without any backstory, it opens with a speck of a man bobbing in a great watery expanse, buffeted by the waves of a storm-ravaged ocean that almost swallow him whole. Washed ashore on a deserted tropical island, the bedraggled castaway forages for food; his only companions are the scurrying crabs that shadow his every move on a lonely beach. Using bamboo cut from the island’s interior, he builds a large raft and sets sail for an unknown destination, but the voyage is quickly thwarted by an unseen being that destroys his makeshift vessel, shattering it to pieces. A second attempt ends similarly, but on the third unsuccessful try, he finally comes eye to eye with the creature that keeps sabotaging his departure, a giant sea tortoise with a scarlet-hued shell, a majestic tortue rouge. The connection between them is fleeting, but powerful. Back on the island, the frustrated man sees his mystical adversary come ashore and vengefully flips it on its back, leaving it to die in the blazing sun. But like Botticelli’s Venus sprung from a half-shell, a beautiful copper-haired woman later emerges from the split casing of the dead terrapin. She becomes his Eve, and the remainder of The Red Turtle recounts their years together on their secluded Eden. Who knows what it all means, or whether it’s intended to mean anything it all. But it sounds like something from an ancient myth, doesn’t it?

The film is directed and co-written by British-Dutch animator Michaël Dudok de Wit, who makes his feature-length film debut here. (De Wit won an animated short film Academy Award for “Father and Daughter” back in 2001; The Red Turtle is nominated this year in the category of animated feature film.) The animation is handsome and specific, and the colors (like Japanese watercolors) are evocatively peaceful, except for the sudden splash of red that marks the titular turtle’s initial appearance and the monochromatic shades of the exile’s dreams. Without the benefit of dialogue (the exclamation “Hey!” is the only word uttered in a handful of places in the film), The Red Turtle succeeds in conveying its narrative about devoted companionship without the need for language. Some may find the movie a bit obtuse in its innate lack of drama (though a devastating natural disaster occurs over midway through the film), while others may find poetic beauty in its guileless lack of complication. Whatever your perspective, there’s one thing for sure: The Red Turtle is unlike anything else you’ve seen in a while.