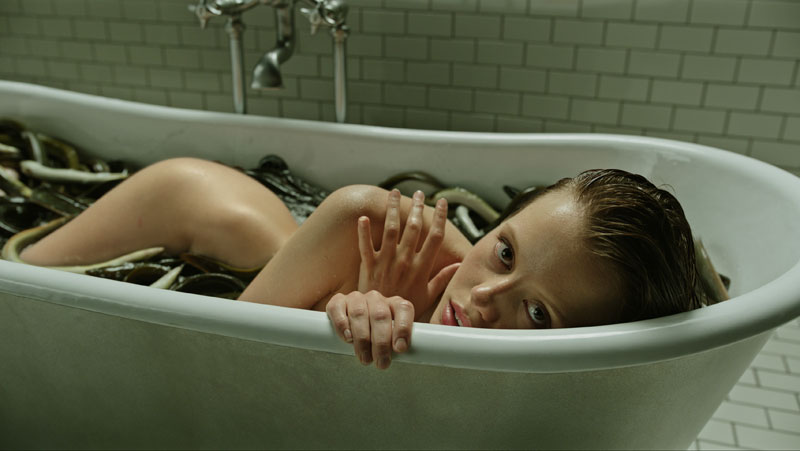 A Cure for Wellness

The only cure for this ludicrous exercise in Gothic mystery would be abstinence. It would curb the contagion and deprive the film of the oxygen it needs to survive. Even if an hour or so were to be trimmed from its overly long narrative frame, A Cure for Wellness would still arrive on life support, eliciting a reflexive Babinski sign only in response to a few grisly images (bathtub of eels, anyone?). Furthermore, this will not be the movie that sways popular opinion back in favor of Pirates of the Caribbean director Gore Verbinski following the creative and commercial disaster of his last film, The Lone Ranger. Not even the appearance of Johnny Depp with a dead crow on his head could provide A Cure for Wellness a pick-me-up.

Capitalizing on a sense of dread that’s established in its confusing opening scene during which the story’s MacGuffin keels over while drinking a glass of water from the office water cooler, A Cure for Wellness sends its real protagonist, young Mr. Lockhart (DeHaan), to a sanitarium in the Swiss Alps to retrieve the recuperating water imbiber, Mr. Pembroke (Groener). Only problem is that Pembroke doesn’t want to leave his restorative Magic Mountain, a slightly sinister retreat headed by the very sinister Dr. Volmer (Isaacs). Further complications keep Lockhart in place when he awakes with a broken leg set in a full-limb cast, and also makes the acquaintance of the strange, shoeless Hannah (Goth), who is not a patient but nevertheless lives at the sanitarium. Lockhart tries to solve the mystery that’s contained by the Alpine castle and embraced by its docile residents, but it’s a lot of toing and froing, alleviated only occasionally by vivid scenes of horror: most notably, the extended death throes of a wounded elk and an episode in a dentist’s chair that rivals the one in Marathon Man.

Like The Lone Ranger, which was also written by A Cure for Wellness’ screenwriter Justin Haythe, the worst misstep taken by Verbinski’s new film is its lengthly running time. If it were short and shadowy like a Val Lewton horror film, A Cure for Wellness might have established an effective mood of foreboding. But at 146 minutes, there are just too many scenes with too few payoffs, and even fewer scenes that keep us guessing. The horror that lies at the heart of the film is fairly obvious, and with no characters for whom we have a rooting interest, A Cure for Wellness is as difficult to swallow as castor oil.

Rango
Watch out, cartoon critters: There’s a new sheriff in town, and his name is Rango.