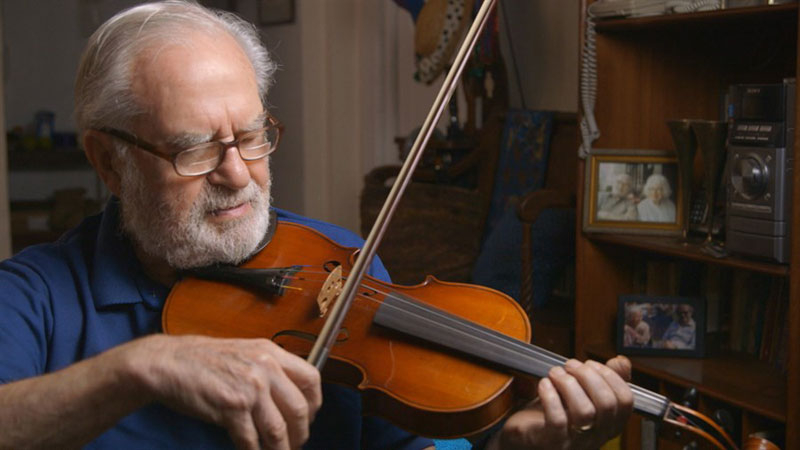 Misery and suffering know no national borders, but refugees from those conditions know all too well their demarcations. That is the message that comes through clearly in these five contenders for this year’s Oscar for Best Documentary Short. Two of the shorts – “4.1 Miles,” and “Watani: My Homeland” deal explicitly with the refugee crisis, while “The White Helmets” showcases the volunteer Syrian NGO that searches for and rescues civilians from urban airstrikes and danger zones. “Extremis,” on the other hand, situates its camera in an American hospital where patients, families, and doctors struggle to make difficult end-of-life decisions. Only one of the films, “Joe’s Violin,” has a conventionally uplifting narrative arc with its story about a man who donates his old violin to a young, needy student. These films all celebrate the human spirit and the will to survive, even if they’re not certain that these aspirations will be met with a welcoming embrace.

Program B presents Orlando von Einsiedel’s “The White Helmets” and Marcel Mettelsiefen’s “Watani: My Homeland,” both of which deal with the consequences of the Syrian civil war. Set in Aleppo as the violence there intensified in early 2016, “The White Helmets” highlights the work of this volunteer organization, whose members run into the rubble caused by airstrikes, digging out living and dead civilians. As with most rescuers in horrific situations, the White Helmets must also worry about their own family members and loved ones. The film presents a ground-level view of their work. “Watani: My Homeland” also begins in Aleppo and reveals the harsh reality of a married couple and their four children. Devoted to the resistance, the parents try to shield their children from the daily bombardments by both the Syrian army and the ISIS fighters, but after the husband and father are taken captive, the mother makes a decision to flee with her children toward the hope of a better life in Germany. The film details the steps undertaken to acquire visas, say goodbye to family, and make the journey. The children all adjust nicely to life without bombings in a foreign land, while the mother, confident that she’s done what is best for her children, still misses her homeland and has not heard anything about her husband’s fate in more than two years. With this microcosmic look at one family, the filmmaker manages to reveal much about the modern-day refugee crisis.