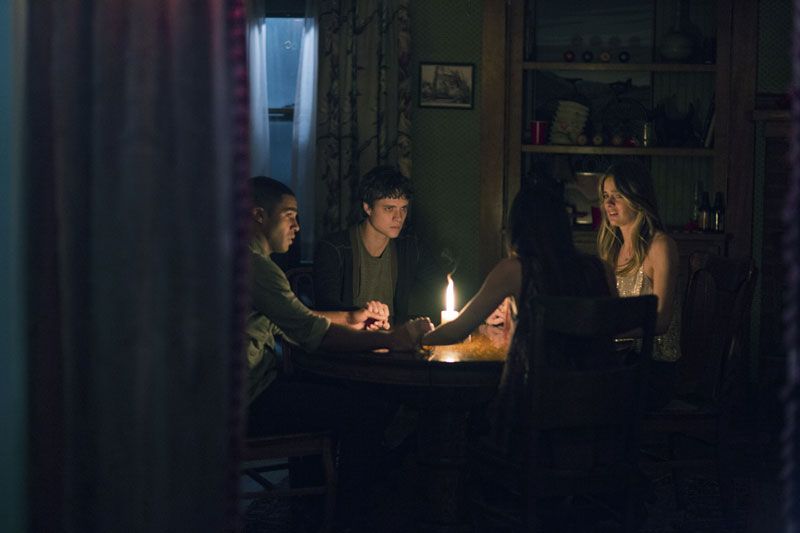 The borderline campy The Bye Bye Man is a horror movie in search of an urban legend. Based on a chapter in the 2005 collection of allegedly strange-but-true paranormal tales The President’s Vampire, the premise is second-rate Stephen King: A quartet of college students unwittingly summon the presence of the titular boogeyman by invoking his name during a séance, inevitably driving them and anyone else who utters the appellation out loud to commit murderous acts once he inhabits the mind. Think of it as Beetlejuice with copious amounts of blood. The auditory and visual hallucinations triggered by the incantation are the mind games of a madman, convincingly scared up by director Title and her young cast at the film’s outset. Initially, it’s tempting to read the film as an allegory about drug addiction (read: methamphetamine psychosis) or paranoid schizophrenia, but the aspirations of The Bye Bye Man don’t aim that high. Red herrings abound, as they do in most contemporary horror films short on substance. What’s with the omnipresent gold coin, the recurring vision of a train track at night, the surfaces seemingly scratched by inhuman claws? They’re never explained, but surely they mean something. (Right.) As the cockamamie narrative staggers forward (Don’t say it! Don’t think it!), the more unintentionally comical the movie becomes. Who would think the sight of someone walking down the middle of a dark road wielding a butcher knife getting flattened by a speeding car could be so hilarious? Beetlejuice! Beetlejuice! Beetlejuice!

Looking like the Grim Reaper with a skin condition, the cloaked Bye Bye Man slinks through the film like a parody of evil. Accompanied by a blazing carnivorous creature this side of the Baskervilles (you could even say it glows), this silent specter is more silly than scary, much like the personification of death in Monty Python’s The Meaning of Life. The real jolt in this movie comes near the end, when the principal possessee, Elliott (a spunky Smith, who slightly resembles the late Anton Yelchin), encounters the elderly widow of the newspaper reporter who said you-know-what back in 1969 and subsequently went on a killing spree in a Wisconsin suburb. Who should she be? Faye Fucking Dunaway! In a cameo in which she wears a cameo, Dunaway resists the temptation to go Joan Crawford during her brief screen time, all solemn and serious. Where’s the thrill in that? In the final face-off with the BBM, the movie keeps one fairly good surprise up its sleeve before reaching its uncompromised but predictable ending. Good thing. By that time, you’re more than ready to say, “Bye bye.” 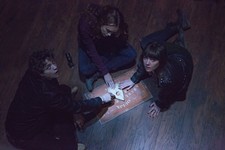 Ouija
Hasbro's soothsaying board is the MacGuffin in this teen horror film. 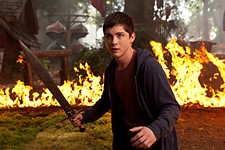 Percy Jackson: Sea of Monsters
Poseiden's son and his pals reunite to retrieve the Golden Fleece, but only the film's special effects grabbed our attention.