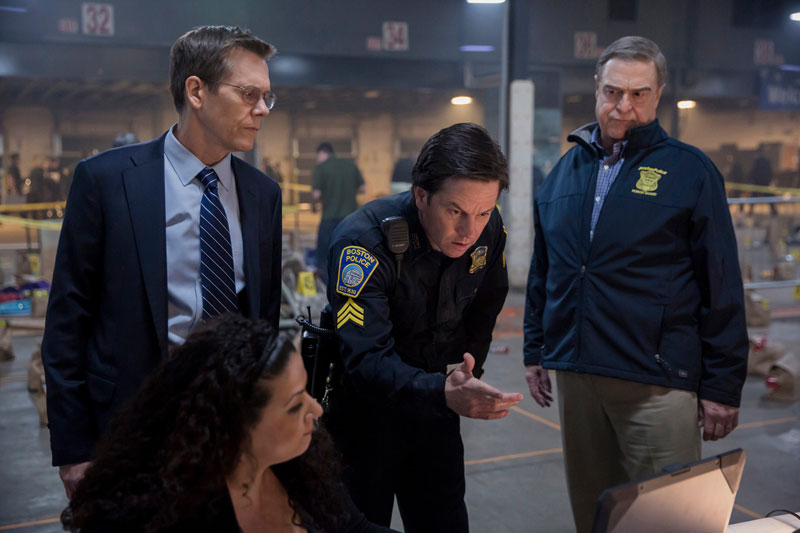 Following 2013’s Lone Survivor and 2016’s Deepwater Horizon, Patriots Day marks the third collaboration between filmmaker Peter Berg and actor Mark Wahlberg on a film about a real-life catastrophe. Named for the holiday on which the events took place, Patriots Day recounts the horrific bombings at the 2013 Boston Marathon, the dramatic manhunt to find the culprits over the next few days, and the immediate and ongoing aftermath that forever changed the lives of the victims. The story is told with heart-rending detail and sympathy (for the victims, though not the perpetrators), although much of it may be overly familiar to viewers who watched the episode unfold live on cable news not too long ago.

Mark Wahlberg plays Tommy Saunders, a fictional composite of Boston’s first responders whom the film places at every key event in the narrative. Even though the Boston native makes for a suitable figure to represent the Boston Everyman, the character’s Waldo-like appearances give the film a fabricated feel, which run counter to its clear desire to channel authenticity. Patriots Day opens like many other disaster movies: with scattered introductions to the various characters we’ll come to see more as events progress – police officials, impending victims, the fraternal bombers Tamerlan (Melikidze) and Dzhokhar (Wolff) Tsarnaev, and so on. The explosion occurs about 25 minutes into the movie, and even though viewers know what is coming, the panic and the sight of severed limbs and other gruesome realities may be tough to take. Yet, to its credit, the film doesn’t linger unnecessarily over the horrors, and quickly turns into a police procedural. As the FBI takes over the investigation from the local authorities and sets up a command center, the details of this process are fascinating to observe. Special Agent Richard DesLauriers (Bacon) of the FBI engages in illuminating debates over protocol with Boston Police Commissioner Ed Davis (Goodman) and Massachusetts Governor Deval Patrick (Beach), and the specifics of how the bombers were located via the use of retail surveillance footage prove revelatory as well. Each piece of information narrows the investigation, while the dragnet widens its scope beyond Boston proper. The hunt is filled with inherent drama as the brothers continue on to murder an M.I.T. police officer, hijack a car and its driver (Yang), are responsible for a call for all citizenry to shelter in place, cause a bloody firefight on a quiet residential street, and then hole up in a backyard boat. The brothers’ beliefs aren’t given much voice; Berg keeps attention focused on the overwhelming chaos and human tragedy.

In setting up Walhberg’s Saunders as the film’s heartbeat, Patriots Day suffers when he is absent from the plot during the brothers’ hijacking interlude, which is, arguably, also the most tension-filled chapter of the movie. Overall, there’s a disjointed feel to the proceedings as the fictional Saunders is inserted into this factual narrative, which also employs news footage in its visual design. The music score by Trent Reznor and Atticus Ross (The Social Network) amps up a jangly equivalent for exploding bombs, and a longer-than-customary afterward featuring observations by the real victims provides an apt tribute. That, of course, comes after a dramatic fadeout on a picture of JFK, which then cuts to David “Big Papi” Ortiz and his heartfelt shoutout to the Boston Strong mystique when he spoke before the first Red Sox game after the tragedy. “This is our fucking city,” Ortiz declared. Peter Berg has made a movie that seems designed to echo that sentiment.