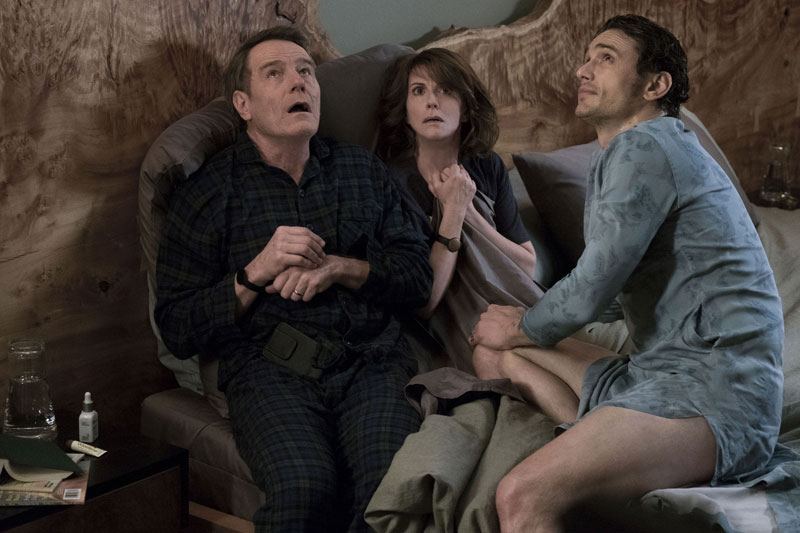 Have we reached the James Franco tipping point, the moment when the mere mention of the ubiquitous multi-hyphenate’s name induces a collective grinding of the teeth? Not yet, but we may be getting close. In the naughty-but-nice holiday comedy Why Him?, Franco’s well-meaning but maladroit Silicon Valley tech mogul Laird Mayhew blunders through the film with the grace of a DOS operating system. Tatted up like a sk8er boi and frequently shirtless, this profanity-spouting bro is doomed to make the wrong impression (despite good intentions) on the strait-laced parents (Cranston and Mullally) of his more grounded girlfriend (Deutch), a far younger college junior he wishes to marry, much to her overprotective father’s horror. Franco has made a career out of playing characters similar to this genial Gen-X vulgarian (Pineapple Express, Spring Breakers, The Interview), but the gig is wearing thinner with each progressively cartoonish performance. When he’s in this mode, he’s like a big puppy dog, all too eager to please, even when the character is a dangerous dude. No doubt, these paychecks allow this fearless jack-of-all-trades to engage in a seemingly endless variety of other and arguably more worthy projects (does the guy ever sleep?), but he needs to ask himself at some point: at what price?

Luckily for Franco, Cranston makes for the perfect comic foil in Why Him?. That craggy, lived-in face can launch a thousand laughs with a simple squint of the eye, cock of the brow, or clinch of the jaw. (He has the gift of Spencer Tracy – the ability to do so much by doing so little.) Watching this film, you’re reminded of Cranston’s befuddled dad on Malcolm in the Middle, before he morphed into the murderous Walter White. In their scenes together, Cranston inspires Franco to take it up a notch, and the results are enjoyable. The raunch factor in Why Him? is relatively low compared to other R-rated comedies these days, with the emphasis focused more on family dynamics and, yes, romantic love. A scene involving Cranston attempting to negotiate the mechanics of a high-tech automated Japanese toilet, however, provides some requisite crude humor, with Mullally similarly following suit later. And for all the potty mouths, there are plenty of nasty internet porn-site expressions played for laughs, words like “double dicking,” “bukkake,” and “motorboating.” Needless to say, you won’t find those in your Funk & Wagnalls. Try Urban Dictionary instead. 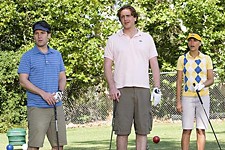 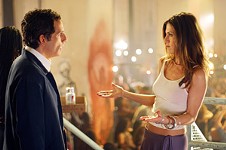