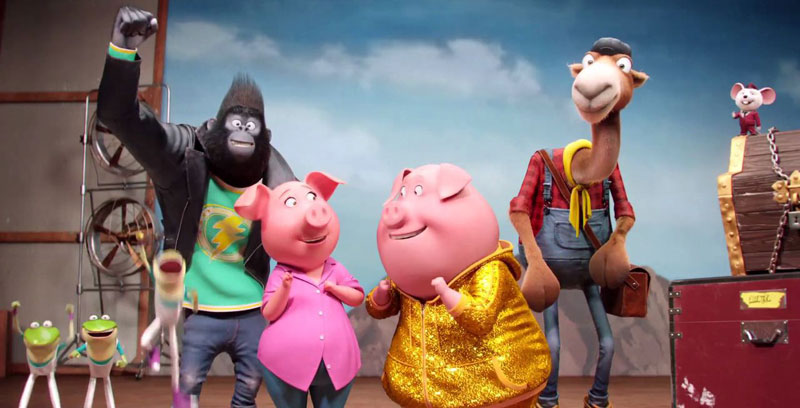 Whether in karaoke bars, television singing competitions, or uploaded YouTube videos, it seems that no one these days can refrain from bursting into song. And what’s good for human beings turns out to be good, too, for the bipedal, talking (and trilling) animals that populate the world of Sing, the latest animated movie from Illumination Entertainment, the company that’s also responsible for Despicable Me and The Secret Life of Pets, although the movie it most resembles may be Zootopia, this year’s other animated movie about animals who live and work in an urban city, just like their human counterparts.

The movie is cute but predictable, and destined to be a blockbuster. It had better rake in the bucks, given the vast sums of money that must have been doled out for star salaries and music rights to scores of popular songs. Not only does Sing wisely tap some A-list talent with known singing abilities (i.e., Reese Witherspoon, Seth MacFarlane, Scarlett Johansson, and Tori Kelly), but the large supporting cast is made up of top names in entertainment such as Jennifer Hudson, John C. Reilly, Nick Kroll, Leslie Jones, and Rhea Perlman, to name just a few.

Matthew McConaughey stars in a mostly non-singing role as a koala named Buster Moon, who stages a vocal contest as a last-ditch attempt to save his old theatre from foreclosure. Throngs of animals line up to audition. The final contestants are Rosita (Witherspoon), a stay-at-home pig mother stressed by 25 piglets; Mike (MacFarlane), a rat(pack) crooner and gambler with Frank Sinatra stylings; Ash (Johansson), a punk porcupine sporting a Mohawk; Johnny (Taron Egerton), a gorilla soul singer who needs to break away from the family robbery business (amusingly, the gorillas all don bunny masks to hide their identities while on the job); and Meena (Kelly), an elephant whose powerful voice belies her lack of confidence. The plot is pretty bare-bones, moving from one song-and-dance interlude to the next. Some cute visual gags, such as a snail singing its heart out while balanced atop a microphone or the koala and lamb throwing their bodies into their car wash jobs, bring smiles. Directors Garth Jennings (Son of Rambow) and Christophe Lourdelet have fashioned a pretty sweet movie, despite dousing it with overkill. The effect is “a little pitchy, dawg.” Son of Rambow
Amid this endearing story about two boys in Eighties England who join together to make their own Rambo movie, lies an uncommon, unaffected portrayal of young male intimacy.