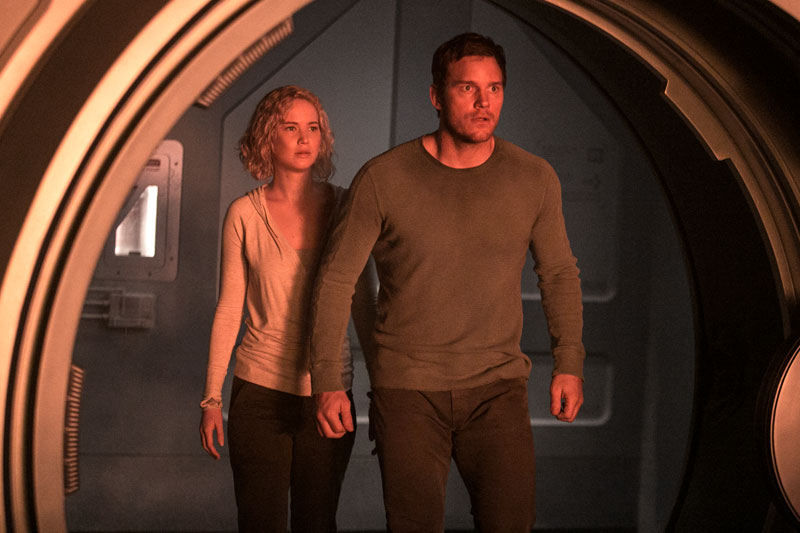 Would Passengers lay an egg or shit the bed? Following some clumsy trailers and then early reviews that pushed back at the film’s gender politics (let’s put a pin in that), advance buzz suggested it was going to be either option a) egg, b) bed, or circle c) for both. Passengers does land wide of cinema’s space-odyssey brass rings – it’s nowhere near as soulful or questing as 2001 or Moon – but as popcorn entertainment, it’s surprisingly provocative. Benefit of the doubt here, I think that was by design, even if the filmmakers flub the follow-through.

A space vessel named Avalon crosses the galaxy on autopilot from overpopulated Earth to the roomy frontier planet Homestead II, as 5,000 passengers and another 250 crew blissfully hibernate in their pods. They’ll awaken 120 years after launch but still a luxurious four months out from their destination, leaving plenty of time to enjoy the amenities of this galactic cruise ship, including a sushi bar, basketball court, and next-level infinity pool with a bird’s-eye view of the cosmos.

Only a systems malfunction wakes up one passenger early – like, whoopsy daisy, 90 years too early. A mechanical engineer and economy-class traveler, Jim (Pratt) tries to figure out how to get back to sleep. When that doesn’t work, he tries drowning in drink with a robot barkeep named Arthur (Sheen), programmed to dispense short pours and dry quips. When that doesn’t work, Jim grows a grief beard and considers suicide.

A year into Jim’s accidental solitary confinement, another passenger (Lawrence) is rudely jolted from space sleep. First seen slumbering behind glass, her name is Aurora, and Chris Pratt’s jawline was perfectly cast to play Sleeping Beauty’s prince. (Subtlety is not Passengers’ strength.) Newly awakened, Aurora, a writer from New York, cycles through the same stages Jim once did, contemplating a robbed life, but the sting is somewhat lessened: She has the balm at least of knowing she’ll have someone to grow old with.

Director Morten Tyldum (The Imitation Game, Headhunters) corrals some stunning visuals (that kick-ass pool kicks ass back when gravity revolts) and doesn’t completely whiff at sequentially serving multiple masters, from romance to psychological drama to catastrophe-action as more systems start to fail. But truly, the most interesting thing about Passengers is the conversation happening around it. Back to the gender politics! (Stop reading now if you don’t want a plot point, which happens about 30 minutes in, danced around, if not explicitly revealed.) The script, by Jon Spaihts – no stranger to pissing people off, his CV includes Prometheus and Doctor Strange – first landed in 2007 on the Black List, the annual compendium of the best unproduced screenplays. Presumably the script has undergone revision since, but the ethical quandary baked into its premise – as one character explains it, if you were drowning, would you pull someone else down with you? – demands follow-up questions in 2016. Consent wasn’t invented post-2007, yet the degree of quickness and seriousness of mainstream media to consider it has radically changed. We’re not quite in the age of wokeness – more like the age of talking about wokeness – but that’s still an exciting time to be thinking critically about popular entertainment.

Characters making morally questionable decisions is the foundation of drama, and Passengers’ narrative arc – coursing the acknowledgment of guilt, the seeking of atonement – is a classically tested model. Passengers doesn’t pretend like it hasn’t dropped a hand grenade, and it reinforces the violation behind that fateful decision by framing a no doubt sincere apologia with surveillance cams and an intercom assault. If only it didn’t try to reverse course back toward romance, a ship already sailed. Were Passengers a modest little art film, that morally murky path might be applauded as subversive. To continue the thought experiment, the same film with gender-reversed roles is a tantalizing what-if. Instead, we’re left to ponder what is: a kinda corny, kinda cool, big-budgeted Hollywood to-do with the nerviness to ask a million-dollar question but baffled by how best to answer it. Still, not a bad conversation starter. 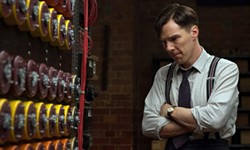 The Imitation Game
The heartbreaking life of Alan Turing, the engineer who changed World War II 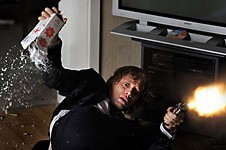 Headhunters
This Norwegian crime thriller is anchored by a schemer who brings on his own ruin.