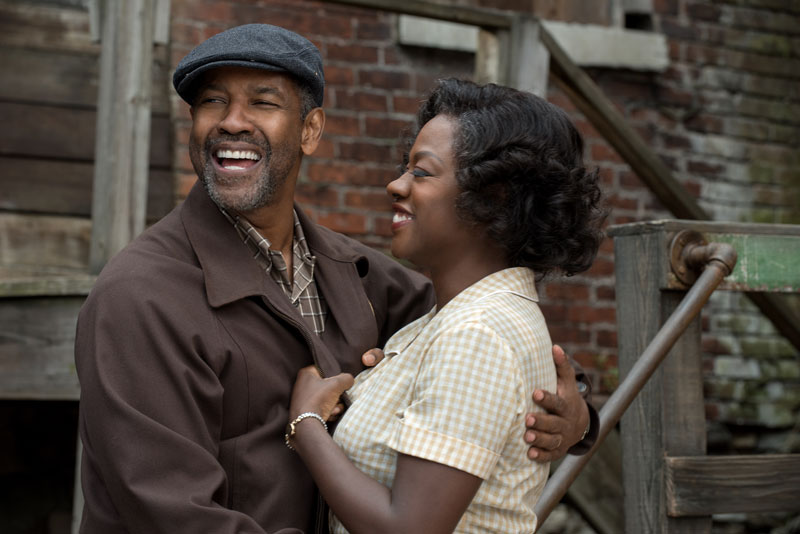 This is Denzel Washington’s third at bat behind the camera while directing himself and, holy smokes, does he knock it out of the park with a vicious, visceral performance that fairly sets the screen ablaze. Adapted from the canonical Pittsburgh-set play by August Wilson, Fences crackles with spitfire dialogue, blazing emotions, and worn-down, gut-punched humanity.

Washington is Troy Maxson, once a Negro Leagues all-star baseballer, then an ex-con, and now an embittered garbageman, stuck in a self-made cage of steely regret and an inability to move forward in life. Viola Davis is his wife Rose, patient with her husband’s gin-fueled tirades but also trapped in a marriage that has incrementally gone rancid. Caught between the two is their teenage son Cory (Adepo), who dreams of breaking through his family’s metaphoric fences via a college football scholarship. And then there’s elder brother Lyons (Hornsby), an aspiring jazz musician who mostly drops by the family home to touch Pops for some cash now and then. For Troy, every day is the same: up at dawn on the back of the garbage truck and home by five, emptying a pint of gin on the backyard stoop with fellow ex-con and friend Bono (Henderson), who mostly sits and listens as Troy rails against the plight of the black working man in a white man’s world while never once facing up to the fact that the mess he’s found himself in is wholly his own creation. In between his lengthy harangues about the unfairness of life, he belittles the dreams and ambitions of his sons and seethes, a manic man aflame with a stoic sort of self-loathing.

Washington’s performance here is something to behold. It’s his best yet, and although the character of Troy is a woeful, ugly beast of a man, the actor imbues him with a rough-and-tumble charm. When he’s not scowling, he’s flashing those pearly whites in a sharklike smile that’s more grimace than grin. Davis, too, turns in a slowly simmering performance that’s mostly revealed through body language and the momentary, intimate flashes of emotion that wash over her face in the wake of her husband’s tidal waves of sermonizing invective.

Fences garnered author Wilson both a Tony Award for Best Play and a Pulitzer Prize for drama in 1987, and this film adaptation will likely pick up an Academy Award or two come Oscars season. It’s an American tragedy through and through, a portrait of black life in the mid-20th century, and hands down Denzel Washington’s finest hour yet. The Great Debaters
Denzel Washington directs and stars in this inspirational but predictable drama set in the Jim Crow South of the Thirties.