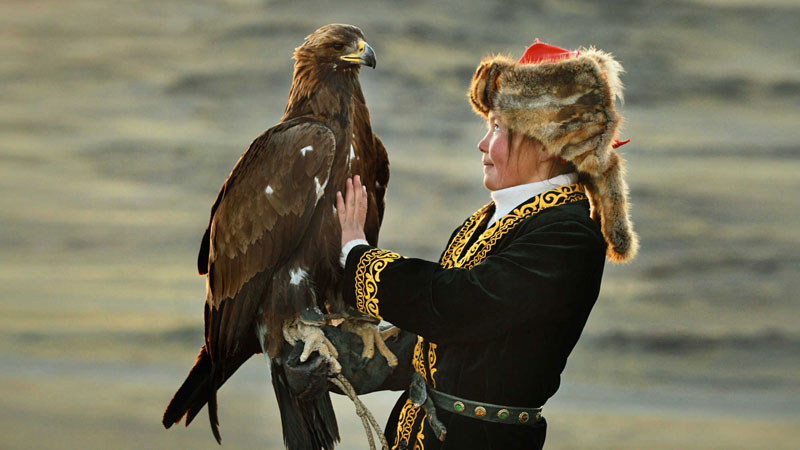 Girl power takes flight in this upbeat documentary about a 13-year-old Kazakh girl in the remote Altai Mountains who flouts centuries of tradition to become the first female eagle hunter in her family. It’s a kick to watch the guileless Aisholpan and her soaring companion break through the sky-blue glass ceiling of northern Asia to claim her own birthright in this family-oriented film with a post-feminist bent. With the unconditional support of a sympathetic father who patiently trains her in the art of falconry, Aisholpan pursues her ambition without apology, undeterred by the scorn and derision of the cultural patriarchy. (The before-and-after interviews of these naysayers, which precede and follow Aisholpan’s upset victory over her older, all-male competition at the region’s annual Eagle Festival, are the film’s comic highlights.) For today’s generation of daughters, she’s an authentic movie heroine, like Katniss, Elsa, and other third-wave girls on film who defy gender expectations. No wonder grrrl du jour Daisy Ridley, the scrappy Rey in the reinvigorated Star Wars franchise, offered to narrate the film after seeing its premiere at the Sundance Film Festival earlier this year. In an industry that manufactures its idols, Aisholpan is the real thing.

But can the same be entirely said for The Eagle Huntress? The film’s feel-good high is tempered by a bothersome suspicion about where the line between documenting the truth and shaping the truth is drawn. To be clear: There’s no doubt about the veracity of Aisholpan’s inspirational story. She exists, and she’s a champion in every sense. But many sequences in the film appear planned out, even staged, lessening the thrill if you focus too much on the convenience of the narrative arc or the precision of the beautifully framed shots. If you didn’t know any better, you might mistake The Eagle Huntress for a narrative feature film. (Perhaps that’s the reason for the added five minutes of narration supplied by Ridley.) Ever since seminal documentarian Robert Flaherty manipulated Nanook’s world back in 1922, the genre has tended to focus more on the cinema than the vérité. Maybe the conundrum is simply the nature of art, to impose a point of view on life and structure it accordingly, with the objective of extracting something meaningful in the end. Or maybe, it’s just like the bumper sticker says: Reality is in the eye of the beholder.