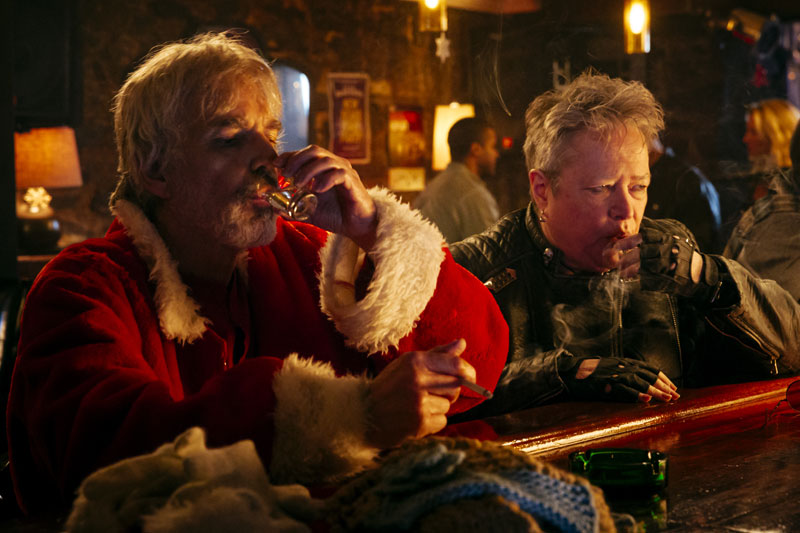 Released 13 years ago during Thanksgiving week, the first Bad Santa hit the screen with felonious glee. Now the sequel, Bad Santa 2, explodes with so much pent-up raunchiness and wrongdoing that it can feel like the film’s cup (of jizz) runneth over. The original film hit with stealth force, using the holiday’s iconography and sentiments against us in an assault on our expectations. The breakthrough screenplay by Glenn Ficarra and John Requa, and the direction by Hollywood outsider Terry Zwigoff (Ghost World) helped carve Billy Bob Thornton’s reprobate Santa into a shamanistic tool to ward off the season’s insincere excess of glad tidings. The sequel, however, substitutes the much less iconoclastic Mark Waters as the director and a screenplay by first-timer Johnny Rosenthal and Whip It’s Shauna Cross, for a resulting product that overdoses on raunch but leaves the wit behind.

The new film adds Kathy Bates in a Mrs. Claus costume to the larcenous team of Willie (Thornton) and Marcus (Cox), who robbed stores on Christmas Eve after casing them for weeks while playing Santa and his elf for scores of kiddies. In addition to thieving, Willie’s sins include alcoholism and indiscriminate sexual intercourse with all willing orifices. Bates is cast as Willie’s wretched mom, who may be even more degenerate and conniving than he. The Oscar winner appears to be having a blast as she strips off the Mrs. Claus veneer right down to her biker-chick tattoos; nevertheless, it’s disconcerting to hear her constantly addressing her son as “Shitstick” along with the rest of her crude dialogue. There’s more shock than humor in her lines, and the same goes for the other characters, among them the returning idiot child (and now grown man) Thurman Merman (Kelly). Bates fares better than the film’s other female characters, whose only narrative function is as semen receptacles, a group that includes Christina Hendricks as the sex-starved head of the Chicago charity that is to be robbed, Jenny Zigrino as a buxom security guard that must be seduced, and Octavia Spencer as a prostitute, here reprising a cameo bit from the first movie.

It would be dishonest to say there are no laughs to be had in Bad Santa 2, but they’re not the kind that help spit in the face of the holiday’s hedonism and forced merriment. These jokes may be good for momentary release, but the joke’s no longer on the holiday: It’s on us. 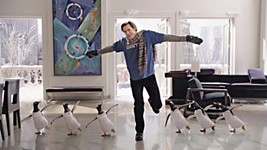 Mr. Popper's Penguins
Jim Carrey plays a man who inherits six penguins in this family film that finds the actor neither too manic nor mawkish.