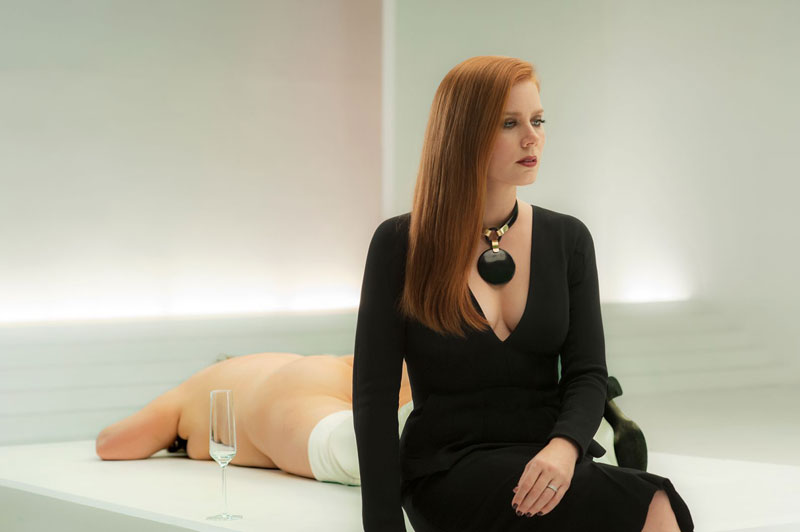 Is it wrong to keep referring to Tom Ford as a fashion designer? To be sure, he’s a designer, but with this, his second feature film (following 2009’s stunning A Single Man), I feel compelled to start hyphenating the man, in a good way. Nocturnal Animals doesn’t arrive with as much of the shock of the new as his debut, but nobody should peg this as a sophomore slump. It’s a narratively audacious, ultra-stylish, and at times queasily violent film that’s likely to polarize audiences even as they find themselves unable to tear their eyes from the screen.

Spinning a tale within a tale that recursively loops back and forth throughout a relationship’s beginning, middle, end, and beyond, Ford, adapting from the late Austin Wright’s novel Tony and Susan, again uses Alfred Hitchcock as a touchstone but this time adds more than a little Douglas Sirk.

Adams is Susan, the manager of a high-end Los Angeles art gallery. She’s married to natty philanderer Walker (Hammer), and while the couple seem to have it all – their mansion overlooking the City of Angels is, in a word, heavenly – their finances are in disarray and Susan, an insomniac, is dwelling on past romantic decisions, specifically her first husband, Edward (Gyllenhaal), an aspiring author from Texas whom she ultimately scorned in favor of the bourgeois lifestyle her wealthy parents offered.

As it happens, the next day a package arrives in the mail containing an advance proof of Edward’s first book, titled Nocturnal Animals and dedicated to Susan. It’s here that the main story splits off and becomes the novel, in which a family – the father is also played by Gyllenhaal – driving to Marfa for a vacation are attacked by a trio of deranged maniacs straight out of The Hills Have Eyes. Genuine, cringe-worthy horror follows, with Gyllenhaal’s character eventually teaming up with Michael Shannon’s stick-thin sheriff for some old school, West Texas justice.

Revenge may be a dish best served cold elsewhere, but here the varying shades of vendettas are painted in harsh, hot colors by Ford and his director of photography Seamus McGarvey. Cutting between Susan’s current, less than fulfilling life as she reads Edward’s novel and the fictional world of the book makes for an intriguingly complex movie, but until the final shot, Ford’s relentless attention to color, composition, and character detail threaten to overwhelm the story he’s telling. Nocturnal Animals is a far more ambitious work than the Oscar-nominated A Single Man and it sometimes gets lost within its multiple storylines of regret and vengeance. Still, it’s a ravishingly gorgeous film, and Gyllenhaal in particular gives a howlingly good performance. It’s not for the faint of heart – the title sequence alone should make that apparent – but those seeking pre-Oscar bait will be well served by seeing it on the big screen where Ford’s dark vision can best be appreciated.

A Single Man
Tom Ford ditched fashion designing for filmmaking with this smart adaptation of the Christopher Isherwood story about a grieving gay man in 1962 California.