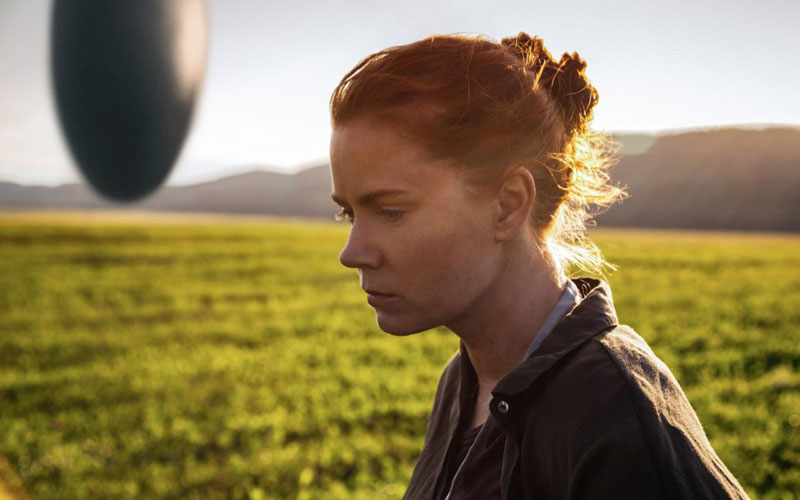 Arrival has a puzzle at its center, one that we’ve toyed with many times before: What do we do when the aliens arrive and, just as important, how do we communicate with them? This is the conundrum confronting the protagonists of Denis Villeneuve’s new film, the depressed linguist Louise Banks (Adams, crushing it), and Ian Donnelly (Renner), a cosmologist with a healthy dose of brainiac optimism. Louise is depressed because her daughter has died young from an illness. This information is relayed in a painful but perfectly pitched montage that echoes the entire film’s sense of wonder and sorrow. The antagonists, as per usual, are not necessarily the recent intergalactic arrivals but instead the militaries of the world who – again, as ever – can’t seem to unite unless Jeff Goldblum is somehow involved. The human race itself is indicted, as the appearance of twelve stony, ovum-shaped UFOs appear hovering just yards over the earth at various far-flung locales. Linguist and scientist must race against the worst natures of their own species and learn to converse with the aliens before global catastrophe.

Arrival is a thoughtfully realistic depiction of how such an event might play out, and with Adams in the lead, it’s also a deeply soulful film, shot through with loss, regret, and hope. Like almost all great sci-fi films it’s less about the alien unknown than it is about the human condition. Fans of Interstellar will recognize its vibe straightaway, and tonally the film owes a great debt to Robert Wise’s 1951 genre classic The Day the Earth Stood Still (not to be confused with the execrable 2008 “re-imagining”). The script, adapted by Eric Heisserer from Ted Chiang’s fine short story, is a model of nuance and restraint most of the time – there’s one superficial and distracting subplot about a steely-eyed soldier that feels oddly out of place – but it's the striking imagery and ominous sound design that really stick with you.

No, scratch that last bit. What really stays stuck in your memory long after the movie has ended and the world has been saved, or just as likely not, is the ache at the heart of the world Villeneuve has created. Louise, lost in her grief until she is confronted by something even more powerful, is a decidedly unconventional sci-fi heroine, but one whose suffering and revelations feel as intimately recognizable as a starry night or a tear on a pillow.