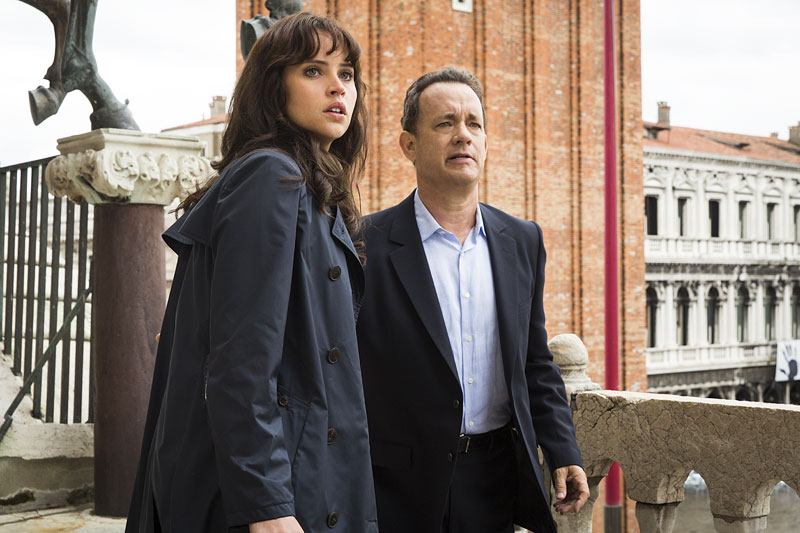 “Nine Circles of Hell” is as good as any descriptor for this topsy-turvy, deeply stressful election season. We all deserve a break. In the case of this latest Dan Brown adaptation, wherein America’s DadTM Tom Hanks slips back into his professor blazer to play symbologist* (not a real thing) Robert Langdon to decode some ancient text and thwart a mass extinction event, familiarity breeds comfort. Ah yes, this is the reliably serviceable conspiracy thriller we know so well. Maybe there’s still some order to the universe after all?

As in previous outings The Da Vinci Code (2006) and Angels & Demons (2009), Langdon finds himself at the center of a ticking-clock scenario, with only his keen intellect and a plucky gal pal to help him unravel the clues to avert catastrophe. Conveniently for armchair tourists, those clues rocket Langdon and Dr. Sienna Brooks (Jones) across scenic points in Old World Europe. Should the viewer weary of Langdon muttering about Dante’s death mask and how it relates to the dastardly plan of a billionaire crackpot (Foster) to decimate the world population, you can always just kick back and enjoy ducking under the visitor’s rope to experience Florence’s Palazzo Vecchio and Istanbul’s Hagia Sophia up close. (They’re very pretty!)

Returning director Ron Howard somewhat belabors the Botticelli-inspired hallucinations Langdon suffers from following a konk on the head – though you really can’t oversell the creepiness of a beaky plague mask – but he continues to have an inspired hand in casting his supporting players. As a high-end fixer, Irrfan Khan is Inferno’s secret weapon. Whether ordering a faraway assassination from his floating HQ or drily doing a whack job himself, you never see him sweat. What a relief. We’ve sweated enough.