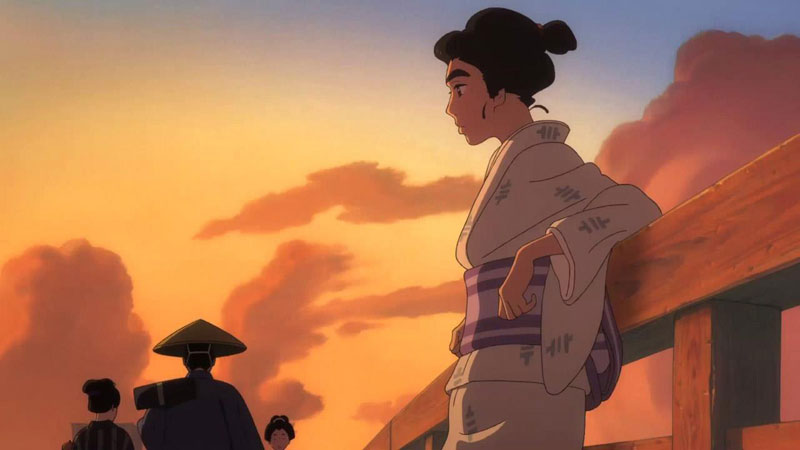 This Japanese anime feature film about an independent young woman living in the artistic shadow of her father, the renowned 19th-century painter and printmaker Katsushika Hokusai, is a sumptuous tapestry of color, shadow, and light, a befitting tribute to the Edo artist best known for the woodblock print titled The Great Wave off Kanagawa. (Director Keiichi Hara incorporates the iconic artwork – somewhat contradictorily – in an otherwise tranquil maritime moment in the movie. You’re likely to gasp at the unexpectedness of the image.) Adapted from the manga series written and illustrated by Hinako Sugiura, Miss Hokusai (as its title would indicate) is told from the point of view of Hokusai’s daughter, O-Ei, a budding artist struggling to find her own creative voice, frustrated by the limitations of an imagination lacking in worldly experience. (Her erotic drawings and dragon sketches are commissioned by her father and sold under his name.) Living a nomadic, hand-to-mouth lifestyle with her mentor parent, a gruff and often difficult individual with little time for family or material possessions, the reserved O-Ei at first appears unsympathetic, particularly in her interaction with others. (Like father, like daughter.) But the tenderness O-Ei exhibits toward her younger sister, the blind O-Nao, not only humanizes her over the course of the film, but also provides the emotional experience (a tragic one, in the end) that inspires her to paint what she knows. Indeed, O-Ei’s autumn-tinted rendering of O-Nao (or someone like her) shown near the close of the film is, in some ways, as astonishing as that stupendous wave.

The artistry of the film’s animation is no less extraordinary. Director Hara and his team have set the bar high here. Some of the imagery is remarkably sensual: the interplay of candlelight in a darkened room, the gentle stirring of a dog’s fur in a sudden wind, the descent of falling snow from a tree’s winter branches. At times, the movement of characters depicted in the film is as fluid as that captured by a camera on a dolly or a crane. (A zoom shot of a bridge in the bustling 1814 metropolis in which the film is set – now modern-day Tokyo – is a jaw-dropper.) And the vibrant hues! Beautiful! On the downside, the film’s episodic and seemingly nonlinear structure flattens the narrative arc that Westerners are more accustomed to in movies centering on personal or artistic growth. For most of its running length, you’re not sure where things are headed, resulting more in slight frustration than eager anticipation. It’s a forgivable flaw, but one that keeps Miss Hokusai a brushstroke or two away from greatness.