Life in the 'burbs gets another humdrum shake-up in the cul-de-sac action comedy Keeping Up With the Joneses. The rickety plot by Michael LeSieur hinges on corporate espionage, but the real crime here is the wholesale assimilation of a Brangelina-like super couple straight from the far superior Mr. and Mrs. Smith. It’s movie larceny on a grand scale. Playing the mysterious titular neighbors with cheekbones to spare, Hamm and Gadot (those eyebrows!) are respectable but somewhat inferior stand-ins for Brad Pitt and Angelia Jolie in their roles as government operatives infiltrating the middle-class world of the rather ordinary Gaffneys (Galifianakis and Fisher). As the Bonds next door, the Smiths – er, the Joneses – are trim, athletic, and beautiful, nothing less than perfect (zero body fat) in the eyes of the soccer moms and beer-belly dads in the hood. Of course, their physical perfection blows their cover; they stand out in their Maple Circle surroundings. Explosions and gunfire predictably ensue once the undercover operation unravels, ensnaring the Gaffneys in a silly plot to identify the insider selling top-secret thingamajigs to the bad guys. It’s meant to be thrilling fun, but it never takes off in the way imagined. There’s no merriment in the .357-caliber chaos, no mirth in the staccato of bullets.

A slimmed-down Galifianakis has some funny moments as the bumbling Gaffney, a HR director who views all human interaction in terms of bonding exercises and other forms of employee therapy. His sense of humor here is refined to the character: flustered, prissy, nerdy, nervous. As his suspicious wife, Fisher flounders when required to behave irrationally (a dry-hump scene is embarrassing), but she holds her own for the most part. (The movie has one very good sex joke involving the two of them.) But in the end, neither of them, singly or together, can rescue this low-concept movie, which progressively grows dumber by the minute. When the diminutive Oswalt appears as the villainous Mr. Big in the disappointing payoff scene, Keeping Up With the Joneses falls terribly short. Not by inches, but at least a good foot. 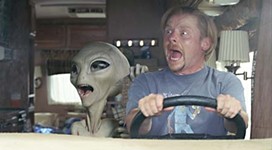 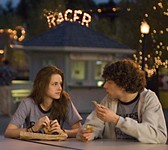