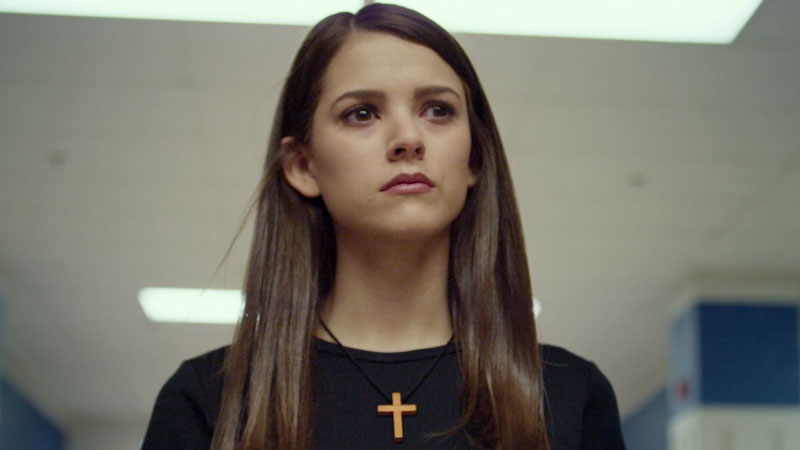 Being a teen in modern-day America is no piece of cake. At least that’s true if you believe everything you see and hear in the movies. However, there’s one thing that’s even harder, according to I’m Not Ashamed: being an out-and-proud Christian teen. You’ll be socially shunned for your beliefs, and if you happen to be Rachel Joy Scott, the first student killed during the Columbine High School massacre upon whose diary this film is based, you might become a religious martyr, as well.

Initially, Rachel (McLain) is portrayed as conflicted by her public and private identities. She parties with her girlfriends, and wants to be noticed by boys. An aspiring actress, she longs for the lead in the school play so that she can work with the Drama Club’s top thesp Alex (McKendry), on whom she has a big crush. She’s nice to all the kids at school and her church youth group, even the social outcasts and newcomers. In private, she longs for meaning in her life and laments her unrequited desire to change the world. She also has a premonition that something big is going to happen and worries that she can’t envision her future.

Unfortunately for viewers, we know full well what that big thing looming in her future is, and the film exploits our fear of the slaughter we know is coming (although the carnage is downplayed once it finally occurs). Using Columbine, in any manner, as a plot point in a teen-identity/Christian marketing film is a bit tasteless. Masey McLain delivers a strong performance in the lead, but director Brian Baugh (To Save a Life) is all thumbs. There’s no pacing to the narrative, and the images are perfunctory. I’m Not Ashamed will draw the same audience that has turned Rachel’s journals into popular reading matter, but the film is not likely to lure any converts.

To Save a Life
This well-meaning but ineptly made message movie teaches that with the help of Jesus Christ, you, too, can prevent teenage suicides.