The idea of the cult classic has historically been linked to time. The excavation of a hidden gem, plucked from long-lost obscurity, and rightly (or debatably) placed on a pedestal of honor, well that’s been going on since before Ed Wood. But in the forever-accelerating whirligig of contemporary culture – where the shelf life of any particular object is measured in weeks, often days – we are now, more than ever before, dealing with films that are often blithely labeled, right out of the gate, as an “instant cult classic,” a term that, quite rightly, you should generally avoid at all costs.

I’m not sure commercial director Jim Hosking’s feature debut will enter the pantheon of the triptych of Wood, Waters, and (unfortunately) Wiseau, but man, does he pull out all the stops for The Greasy Strangler. It will undoubtedly find its place among beer-fueled movie nights of the future, but in its attempt to create a world all its own, in its shock-and-awe conflagration of transgressiveness, the film always seems to be trying a bit too hard, even when it doesn’t give a fuck.

Big Ronnie (St. Michaels, obviously having the time of his life) lives with his middle-aged son Braydon (Elobar) giving half-assed disco walking tours in L.A. (Kool from Kool & the Gang used to work at this abandoned liquor store; The Bee Gees wrote “Night Fever” in this alley.) Otherwise, the two spend their time at their apartment, in their underwear (often less; many a cock, large and small, waggle through the frame) bickering and cooking grease-laden dishes that never seem to satisfy the cravings of Big Ronnie. That’s because, you see, he is the titular strangler, covering his entire naked body in grease to kill at night. Janet (De Razzo), a tourgoer who initially has eyes for Braydon, becomes the third corner of a love triangle that propels the story.

The entry points are pretty clear: John Waters, Daniel Clowes, Tim & Eric Awesome Show, Great Job!, the work of Vernon Chatman (basically anything out of that Williams St. production company). Hosking has a keen eye for this type of cringeworthy comedy, as evidenced by every scene going on 30 seconds longer than it should, and enhanced by over-the-top, cartoony violence. But is The Greasy Strangler a contender for cult classic status? I guess that’s a question for the ages. 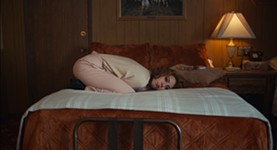