Ninety seconds of creepy-cool stop-motion animation can’t rescue this meh adaptation of author Ransom Riggs’ bestselling dark fantasy trilogy from the rest of its CGI onslaught. Call me jaded, but Tim “Put Stripes on It” Burton and screenwriter Jane Goldman’s two-hour-plus movie is a cautionary tale about the pitfalls of putting page to screen. Riggs’ novels – and the desaturated photographs contained within – are endlessly readable and wildly creative. This film version, which cobbles together elements from all three books, is so overstuffed with Burton-esque goodies that by the time the action-packed, seaside finale arrives, the audience either will be severely winded or outrightly snoozing. Granted, adaptations are notoriously difficult to pull off and it’s a given that the original stories are right up the director’s cemetery lane, but Burton’s wild ride loses much of the books’ existential wonder in the translation.

Young Jake (Butterfield) and his father (O’Dowd) travel from their home in Florida to a tiny Welsh island in hopes of closure after grandfather Abe (Stamp) is found dead under mysterious circumstances. It’s there that Jake discovers Miss Peregrine (Green) and her band of 11 peculiar kids. Orphaned by a Luftwaffe bomb, Miss Peregrine holds her life and those of her charges in an infinite “loop” where the tragedy is held at bay by returning to the exact moment of the attack and restarting the clock every single day, Groundhog Day-style. The children all have unique peculiarities, among them Emma’s (Purnell) complete disregard for gravity and weather, Enoch’s (MacMillan) resurrectional abilities, and Olive’s (McCrostie) pyrokinesis. They are pursued through time and tide by the Wights: tentacled, eyeball-eating beasties led by the dastardly Mr. Barron (Jackson). Exposition ensues.

Burton and director of photography Bruno Delbonnel nail some genuinely haunting imagery: Emma tethered kite-like to a rope pulled by love interest Jake; the arrival of the Hollowgasts, an extreme Burton makeover of Jack Skellington via Slenderman via H.P. Lovecraft; squadrons of Nazi bombers overtaking the night sky; a submerged ocean liner repurposed by the peculiars. But as anyone who’s seen Burton’s Aughts ouvre surely knows by now, entrancing moments like these do not necessarily a great film make. Miss Peregrine’s Home for Peculiar Children is simply too much of a good thing crammed into a single movie. It’s a phantasmagorical chase movie that rarely takes a breather long enough for you to enjoy the sights along the way. 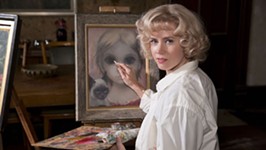 Big Eyes
Amy Adams and Christoph Waltz play the Keane couple, the artists behind the craze of those ubiquitous portraits of wide-eyed waifs.