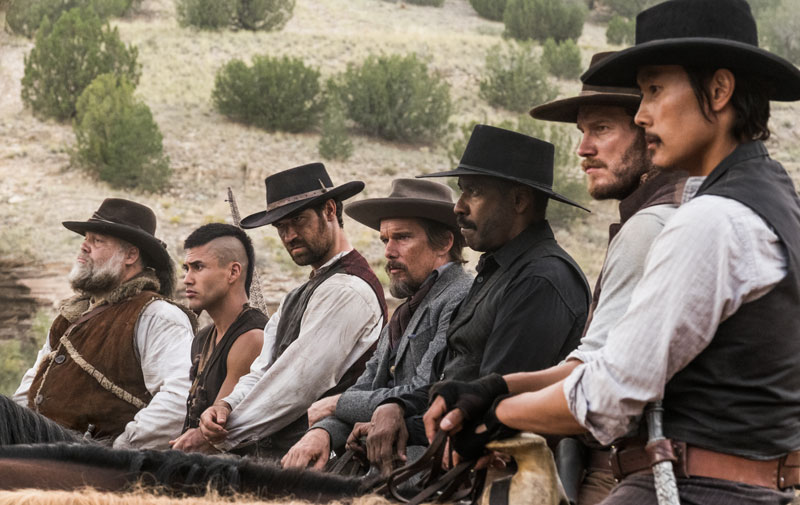 Antoine Fuqua’s revisionist take on John Sturges’ 1960 Western (itself an oater remake of Akira Kurosawa’s 1956 film The Seven Samurai) is not terribly magnificent or noticeably revisionist in any manner aside from its rainbow-coalition casting. Selected as the opening-night film of the 41st Toronto International Film Festival, the 2016 version of The Magnificent Seven gets the job done but hardly sets the bar for fresh and imaginative filmmaking. Sturges’ film wasn’t a notably original work either, but its vibrant cast starring Yul Brynner and the then-relatively-little-known actors Steve McQueen, Charles Bronson, James Coburn, and Robert Vaughn lent the film a desert-dry aura of unruffled cool. Fuqua’s film has the right actors in position, but the script by Nic Pizzolatto (True Detective) and Richard Wenk neglects to provide the characters with enough background history to explain what makes them such original figures in the Old West.

The plot of the three versions is the same. An assemblage of seven good-hearted mercenaries come together to save a defenseless village or frontier community from complete takeover by an insatiable predator (a Japanese warlord, a bandito, or an American industrialist). As the new film, set in 1879, opens, we witness the Western town of Rose Creek threatened and ravaged by the lethal henchmen of Bartholomew Bogue (Sarsgaard, unfortunately playing a cardboard villain), who wants the town’s gold mines all to himself. The local church, where members of the community have gathered to discuss the impending menace, is bloodied by Bogue’s men and then set ablaze as a further warning. Next, Chisholm (Washington), a warrant officer from Kansas, arrives and plays coy with the town bartender before turning the tables on the wanted scoundrel. In Chisholm, Emma Cullen (Bennett, always wearing a low neckline), who has been newly widowed by Bogue’s men, sees a viable adversary and offers this enforcer of justice everything the town possesses to defeat the bad men. In turn, Chisholm rounds up a posse consisting of easygoing professional gambler Josh Faraday (Pratt); Goodnight Robicheaux (Hawke), a Southern sharpshooter, whose sidekick is the Korean Billy Rocks (Lee), a deadly blade-thrower; Jack Horne (D’Onofrio, channeling Burl Ives), a Bible-spouting mountain man and Indian fighter; Vasquez (Garcia Rulfo), a “Texican” outlaw; and Red Harvest (Sensmeier), a renegade Indian wearing perfectly applied facial war paint. They are truly a diverse group, yet the picture might have more credibility if some of these characters dropped some clues as to their backstories that might explain why they were banished from their tribe or became a black law enforcer in the postbellum West.

Despite amounting to less than what we had hoped for, The Magnificent Seven is an agreeable enough movie (even if Denzel’s pearly whites seem too modernly bleached for the Old West, and dialogue like “It is what it is” sounds too much like contemporary jargon). However, what the film lacks in character development, it tries to make up for with a big ol’ battle for all the marbles (or Rose Creek gold nuggets). This climactic death match and its strategical planning take up a good part of the film, as if the makers had more trust in the audience engaging with battle scenes than character studies. But after assembling a cast as good as this and then squandering them, Fuqua may have won the battle while losing the war.