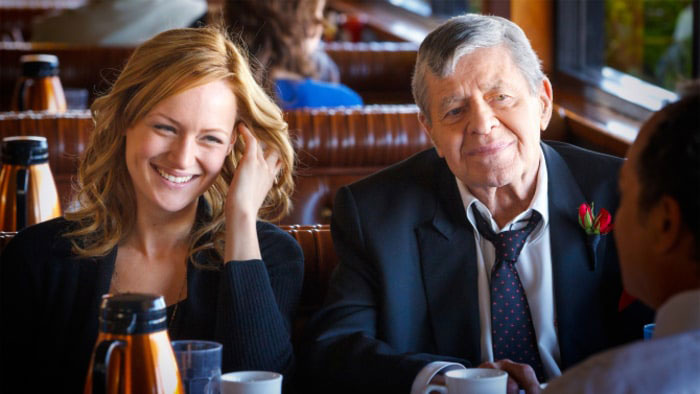 The occasional tick-tock of a pendulum faintly marking the passage of time is a sobering reminder of human mortality in the drama Max Rose, particularly when considering the presence of nonagenarian screen legend Jerry Lewis in the title role. As a retired jazz pianist struggling to make sense of an inscription from someone named “Ben” in his recently deceased wife’s compact case, Lewis gives an impassive performance punctuated by bursts of anguish and recrimination. Arguably, it’s a characterization consistent with the grief of his eightysomething character and the physical (and other) limitations that come with old age. But in the absence of a fluid arc in Max’s journey to uncover the truth about his 65-year marriage, Lewis’ earnest portrayal feels stillborn, unformed. Flashbacks of happy memories of his beloved Eva (the timelessly beautiful Bloom) hint at the joy of the couple’s union, while an ongoing dialogue with her lingering spirit (“Who was he?” “Why?” “How long?”) evokes some semblance of pathos. But the movie never jells like Lewis undoubtedly hoped, and it ends mawkishly. (Not surprisingly, Max Rose has sat on the shelf for three years until now.) Could a more dramatically polished actor also shy of the century mark have done a better job in the role? Maybe, but probably not by much, given what there was to work with.

The script is replete with filler inserted in the name of “real life”: bad jokes and silly riddles, spontaneous songs, and improvised scenes in which conversations go around in circles. Perhaps director/screenwriter Daniel Noah strove not to tax his actors too much. This approach only feels genuine when Max hangs out with a trio of his peers in the assisted-living facility that begrudgingly becomes his new home after a bad fall. Pantomiming the music of an old jazz LP on the turntable late one evening, fueled by whiskey and youthful reminiscences, the four men (particularly an invigorated Mr. Rose) give a glimpse of who they once were so many years ago. It’s the rare buoyant moment in a movie that never quite gets off the ground.