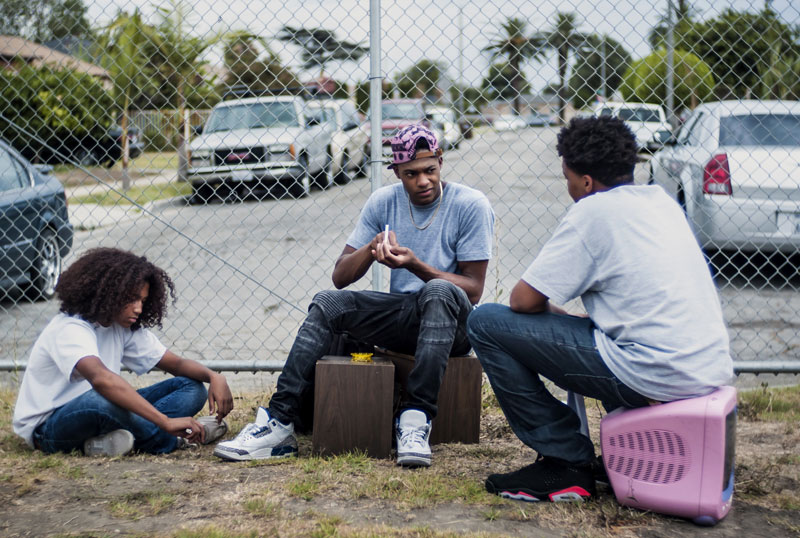 Life can be hard, and more importantly, completely arbitrary. It’s difficult to pull back and examine the patterns when we’re all in the thick of it. So bless those geniuses who are able to do so, and by geniuses I mean the beloved mythologist Joseph Campbell, who so deftly expressed certain contributions to understanding the human condition, articulated most profoundly with the hero’s journey. Justin Tipping’s riveting debut has all the spirit and pacing of that journey, hitting most of Campbell’s tenets; it just happens to take place on the mean streets of Oakland, instead of, say Middle Earth, Hyrule, or a galaxy far, far away.

All Brandon (Guillory) wants is some shoes. He’s been wearing the same busted sneakers forever. A small kid with delicate features and a mane of curly hair, he’s bullied at school and his basketball skills come up short. But at least he has some friends, Rico (Meyer) and Albert (Wallace), who look out for him. Dreaming of owning a pair of original red and black Air Jordans, he happens upon the entrepreneurial spirit of a guy selling kicks out of his minivan, and lo and behold, there they are. Pilfering money from his mom (never seen, as most adults are in the film), he gets those Js, and for a short time he is the master of the universe. But Brandon gets jumped by a thug named Flaco (Siriboe), who steals those magical shoes. Brandon, fed up and wearing his mom’s flip-flops, ventures, with his friends, onto a road of trials that is Oakland to retrieve those shoes, and thus a quest begins.

Brandon’s odyssey, filtered through Tipping’s lens, is at times funny, harrowing, and well, somewhat annoying (way too much slow-mo), but the talent here is clear. In his feature debut, Tipping emerges as a strong voice with style to burn (maybe too much to burn: I haven’t even mentioned Brandon’s imaginary astronaut friend, but you need to discover that one on your own). At times derivative, lyrical, and ponderous, Kicks cannot be ignored. It’s a powerful debut from a director who knows how to capture a moment, and convey a rabid conviction to hold on to your beliefs. Joseph Campbell would approve.