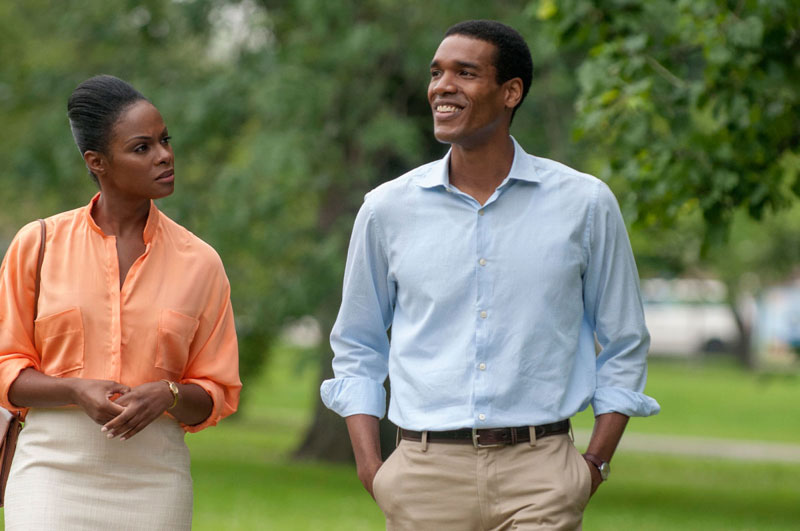 It’s a steamy August morning in Chicago circa 1989, a time when the jaunty Janet Jackson single “Miss You Much” dominated the charts and Spike Lee’s provocative Do the Right Thing incited discussions about race relations in America. A twentysomething African-American man (Sawyers), tall and handsome, contemplatively smokes a cigarette in his undershirt, anticipating the day; as he wanders his spare apartment, you sense there’s something on his mind. Meanwhile, an attractive young African-American woman (Sumpter, who also co-produced the film) on the Southside intently readies herself, fielding questions from her parents about the Harvard summer intern at her law firm who’s picking her up in his beat-up Datsun for an outing she emphatically denies is a date. Not much happens during these first few minutes of Southside With You, the semi-fictionalized version of what, in fact, turns out to be the first date between future White House residents Barack Obama and Michelle Robinson, but the setup is so enticing (the jazzy chords of Stephen James Taylor’s score subtly suggest romance) that you’re instantly on the hook, eager to see how this day will go even though you already know how it will end.

As in Richard Linklater’s lovely Before Sunrise, the film’s principal pleasure comes from watching two people connect as they get to know each other over the course of several hours. (Though too leisurely to qualify as dramas, both films are prime examples of the three Aristotelian unities of action, place, and time.) But unlike the looser, seemingly improvised night-long tête-à-tête along the streets of Vienna in Linklater’s film, the narrative here is more structured, anchored by the conflict between the future husband and wife (he’s insistent, she’s resistant) that informs their tentative relationship. In some ways, this is a classic (but subdued) romantic comedy about the guy who wins the girl over. There are bumps in the script’s road, unrelated to the thorny attraction between these two individuals. For example, while it’s understandable both would share their life histories with each other, Obama’s recitation of his peripatetic upbringing sounds a little like a veiled rebuttal to crazy birther conspiracists. But they’re minor distractions in an otherwise charming experience that seems to float on air during its perfectly modulated length.

As the one-day POTUS and first lady, Sawyers and Sumpter capture the familiar essence of this now well-known couple without impersonating them, imagining them with a fresh perspective about who they were long before becoming famous. (The vocalizations are uncanny.) When Obama gives an impromptu speech to a group of citizens stumped by political obstacles approximately midway through Southside With You, he transforms in the eyes of his reluctant date, his eloquence and intelligence communicating the leader he would one day be. While it may not be the precise moment Barack and Michelle fell in love, it may be one that slightly altered the course of history.

One Vote
From Alaska to Kentucky, the clear importance of voting