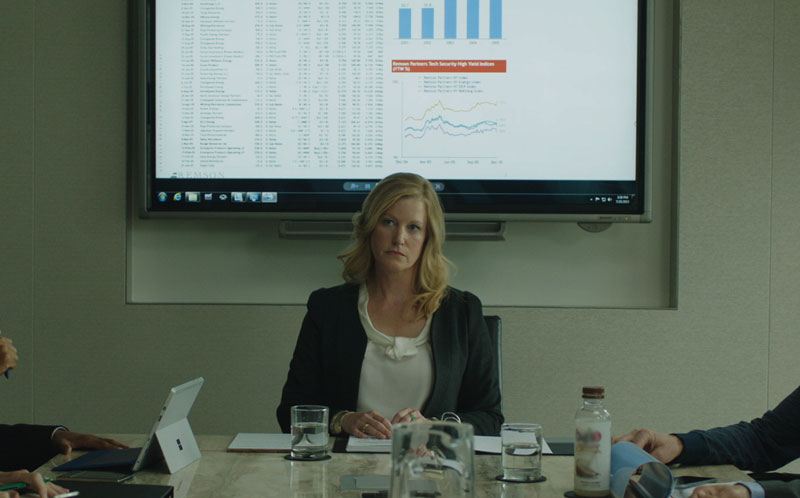 Although tempting, it would be disingenuous to label this movie about women who work in the upper echelons of the finance industry The She-Wolves of Wall Street. Equity does not in the slightest share the balls-out recklessness and scofflaw attitudes of that other movie’s characters, and moreover, its intent and subtleties are more precisely directed at the invisible and unspoken barrier to women’s advancement in this employment sector: the glass ceiling.

Equity is a movie about working women that was made by and financed by women, providing a backstory that’s almost as interesting as the movie itself. It’s a movie that declares that it’s OK for women to like and desire money and be driven by professional ambition. It does not aim to assure women that they can “have it all.” Using subtlety rather than a stick, the film allows such themes room to breathe, although a somewhat schematic script by Amy Fox dampens some of the story’s dramatic intrigue.

Breaking Bad’s Anna Gunn stars as Naomi Bishop, a senior investment banker, whose specialty is taking tech start-ups to their IPOs. As the film opens, Naomi is smarting over the failure of her last deal. Actually, the deal went through, just not with Naomi at the helm. She was thrown over at the last minute for another firm. Naomi is only given vague reasons for the breach of trust: She rubs some people the wrong way, she ruffles feathers, etc. Determined for her next deal to be a gigantic success that will catapult her to the head banker’s chair (her Jenga-playing boss, who tells her that it’s just not her year, is retiring), Naomi is fully committed to delivering a spectacular IPO for her next client, the online security company Cachet. Gunn is a brilliant choice to play Naomi, bringing a mixture of human vulnerability and experienced business acumen to the task. The widely noted vitriolic response that was directed toward Gunn for defying expected gender roles while playing Skyler on Breaking Bad lends extra depth to her portrayal of Naomi.

Assisting Naomi in taking Cachet public is bank vice president Erin Manning (Thomas, also a producer of the film). Erin is angling for a long-delayed promotion as well, and also experiences the conflicts of a newly pregnant careerist. (The scene in which Naomi realizes Erin is expecting is a thing of understated volubility.) Naomi also maintains a professional wall of silence with her sometimes boyfriend Michael Connor (Purefoy), who works in the company’s hedge-fund division. An alumni gathering reacquaints Naomi with former classmate Samantha Ryan (Reiner, another of the film’s producers), a lawyer now working for the state attorney’s office investigating white-collar crime. It’s no accident that Samantha injects herself into Naomi’s life; Sam has a special talent for eliciting information by preying on friendships, drunken male egos, or whatever seems necessary.

Equity looks at the reality of women working on Wall Street from a variety of angles. Narratively, some of the film’s plotting is too predictable, yet the honesty of the situation rings true. Equity leaves telltale smudges on the glass ceiling as it peels back the transparency.