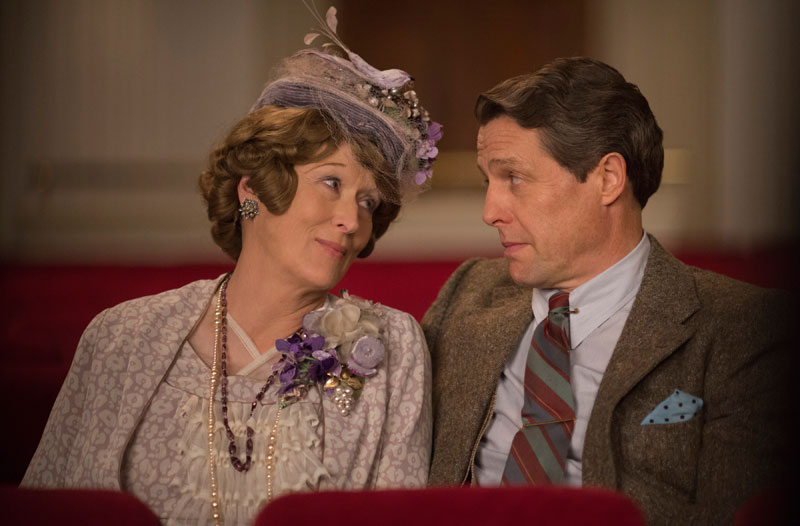 By the time Meryl Streep finally opens her mouth to caterwaul in this sentimental comedy about American socialite and amateur soprano Florence Foster Jenkins – the infamously tone-deaf doyenne once christened “the worst singer in the world” by the New York Post – you can slice the anticipation with a knife. The moment doesn’t disappoint. Her slightly askew arms lifting and falling with the grace of a flightless bird, one hand clenching a handkerchief and the other vainly gesturing for dramatic effect, she decimates the musical scale in a swooping coloratura resembling a wailing cat giving birth, demonstrating an utter lack of pitch, rhythm, and range. Of course, La Meryl performs the off-key singing herself, once again displaying an unerring talent for mimicry but also (as of late) something infinitely more genuine. Early in her career, Streep’s perfection seemed calculated to win accolades; you could admire the precision of her skill and yet disdain the coldness of her technique. But now, the ice queen has thawed to exude a human warmth in almost everything she does, whether she’s playing Julia Child, Miranda Priestly, Margaret Thatcher, or the tuneless Mrs. Jenkins. It’s not so much an eagerness to please, as it is an absence of the need to please. The enthusiastic but strained facial expressions accompanying the warbling of those wobbly notes say everything about the character’s unwavering love for music, a passion that naively betrays her. Discordance has never sounded so rich. No question: Streep is wonderful to watch in Florence Foster Jenkins. The ol’ girl’s still got it.

The movie’s aspirations aren’t as lofty as its clueless heroine’s ambitions, which include a one-night-only 1944 performance in Carnegie Hall. (She ultimately wins the audience over with her chutzpah, as opposed to the hiccuping screech of “The Queen of the Night” from The Magic Flute.) At its most profound, it’s an inspirational greeting card, with words of encouragement about living your dreams bordering on the banal. Try not to focus too much on the upbeat message, summarized in 25 words or less at the end, and instead enjoy the simple pleasure of her company, along with able support from Grant and Helberg as Jenkins’ loyal spouse and loyal accompanist, respectively. For the incomparable Streep, it’s yet another performance in high C. 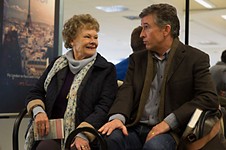 Philomena
Judi Dench and Steve Coogan star in this drama about the search for a woman's son who was taken from her when he was a toddler.