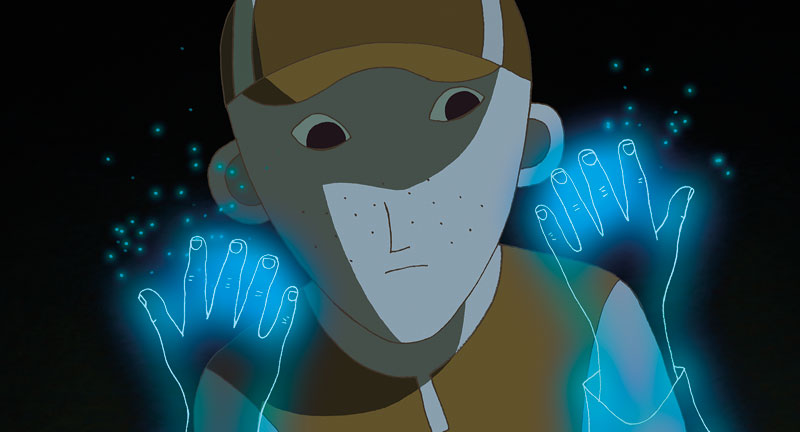 While not entirely as whimsical or visually splendid as the Oscar-nominated directors’ previous film, A Cat in Paris, this animated French feature (dubbed into English) nonetheless makes for a dreamy, lightweight alternative to Pixar/Disney’s usual summertime CGI onslaught. It employs traditional hand-drawn animation to tell the tale of Leo (D’Angelo), an 11-year old boy who miraculously escapes his hospital treatments for an undisclosed, leukemia-like ailment by wishing himself into a kid-hood form of astral projection. Not that that matters, really. Leo, like most kids, is keen to be a superhero, or at least a cop, and so when his floaty ghost-body happens across Alex (Baer/Padalecki), an actual NYPD cop who has been wounded in the pursuit of a hideously scarred supervillain (Marielle/D’Onofrio), he’s determined to untether his mortal coil and help the reluctant lawman track down the bad guy.

It’s a simple story, but the artists keep things buoyantly surreal. Leo’s phantom self caroms around a sketchy, pseudo-Mondrian New York skyline with overlong, trailing limbs, as though reluctant, deep inside, to leave all that ailing flesh and blood behind. (A subplot about the danger of not returning to his sleeping body goes relatively unexplained.)

Notably, Phantom Boy treads territory that’s similar to much of Hayao Miyazaki’s work, with a main character seeking the otherworldly in the face of a terrible reality. Missing, though, is the narrative and emotional cohesiveness that would likely have led to Felicioli and Gagnol’s film being a more engaging and memorable work. Animated with obvious care and feeling, Phantom Boy nevertheless evaporates from your memory as quickly as little Leo vanishes into the New York night.