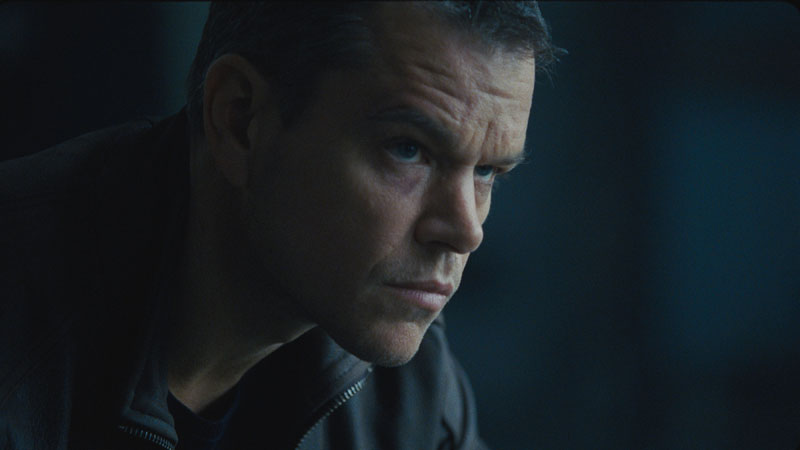 Jason. Bourne. Again. No, Robert Ludlum’s amnesiac CIA agent isn’t born again in the religious sense, it’s just that in this fourth film to star Matt Damon as Jason Bourne (and the fifth film in the series), the character begins to recover some sense of purpose and patriotism. As the film opens, Bourne (Damon) is living on the fringes in eastern Europe, squandering his superior battle skills in off-the-grid bouts of bare-knuckle fighting with all takers. Then his location is discovered by his former contact at the CIA, Nicky Parsons (Stiles), who tries to induce Bourne to join her in her self-appointed mission to expose government data. She has joined forces with a Julian Assange/Edward Snowden-type character who wants to reveal all the information about the CIA’s black-ops programs. Within that information lies the answer to one of the yet-unsolved mysteries about Bourne’s background: his father’s involvement in the CIA missions.

Much chasing by car and by foot ensues. Dyspeptic CIA Director Robert Dewey (Jones) enlists an assassin with a personal grudge against Bourne (Cassel) to eradicate the danger, but the agency’s young cybercrime chief Heather Lee (Vikander) convinces her superiors of the wisdom of trying to lure in from the cold the still-valuable Bourne. There are few better than Paul Greengrass (Captain Phillips, Bloody Sunday) to direct the story’s jagged narrative twists and full-bore action. His notorious shaky-cam shots are now more entrenched in the film vocabulary, and his ability to provide the viewer with the feeling of being inside the movie’s frame is unsurpassed. Yet, characters are fairly undeveloped, and the duplicity of one key player is left unexplored. And if there is a delineating point that separates too much mayhem from just enough, Jason Bourne perhaps crosses that line. An extended climax set in Las Vegas does damage to an untold number of cars, the entire Strip, and the Riviera Hotel (though the latter represents a great use of a landmark that was set for imminent implosion). It seems excessive, something to goose the film into being faster and furiouser, and out of keeping with Bourne’s propensity for staying in the shadows.

Jason Bourne ends inconclusively, and leaves plenty of wiggle room for future escapades. In this post-Wikileaks/post-NSA-privacy-disclosures era, stories about the various black ops conducted by the CIA and executed by Bourne and others seem more relevant than ever. This current film smartly adds material that keeps it up-to-date with the reality of today’s sophisticated electronic surveillance. The series may become a marker by which we come to gauge the future disappearance of all personal privacy. For the sake of the series’ endurance, I hope so, but for the sake of the rest of us, I hope not.