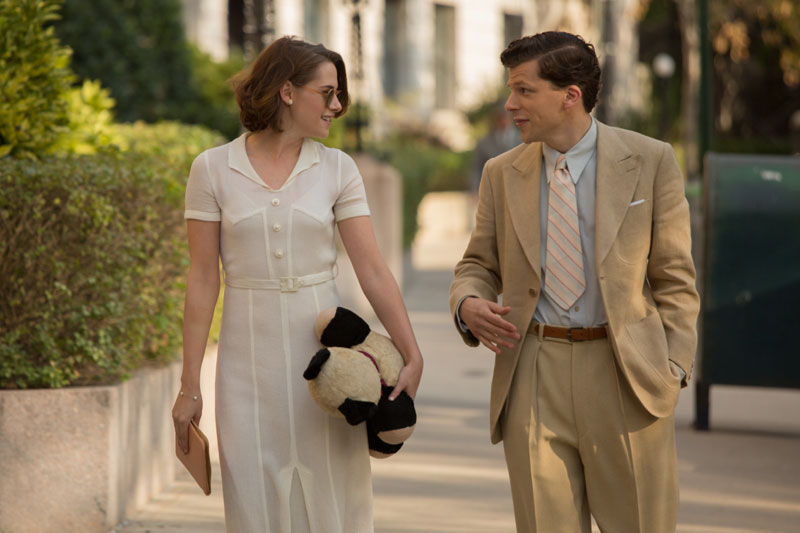 Come for the sophisticated charm and intoxicating wit suggested by the term “café society.” Stay for the rote charms and recycled bons mots offered up by Woody Allen’s umpteenth movie, a decidedly lesser entry in the director’s vast catalog but, as with all Allen movies, a cut above most everything else that passes for comedy these days. (Woody Allen may be the best living example of the auteur theory in action, though if the filmmaker were to spend more time honing his scripts before rushing each new one into production with every passing season, Allen might have become one of the best living examples of artistry in action. Sigh.)

Café Society finds Allen returning to a time period familiar to so many of his films: the past. Set in the late Thirties, the film follows the budding career and love life of Bobby Dorfman (Eisenberg), a young New Yorker who goes west to Hollywood to try his fortune under the wing of his Uncle Phil Stern (Carell), a top Tinseltown talent agent who begrudgingly gives Bobby a job as his personal errand boy. Phil also assigns Vonnie (Stewart), one of his office assistants, to show Bobby the sights of L.A. Their sightseeing rendezvous eventually turn romantic, but are stymied by the existence of Vonnie’s pre-existing but mysteriously absent boyfriend. When the gossamer-thin secret of this love triangle is revealed, Bobby moves back to New York to manage a nightclub owned by his gangster brother Ben (Stoll). There he meets another woman named Veronica (aka Vonnie) and settles into family life and business success.

Narratively, most of the setups and character attributes echo other Woody Allen films, but here the arrangements are more routine and the dialogue more prosaic, less quotable. It doesn’t help that Allen is the unseen omniscient narrator of the film, chiming in with character descriptions and connecting bridges that are either unnecessary or would be better served by showing the audience these facts onscreen rather than having an offscreen octogenarian relate them in voiceover. Nevertheless, the Hollywood colony depicted in Café Society radiates a soft glow, and receives none of the venom or vituperation Allen, the resolute Manhattanite, has slung its way in previous works. Nevertheless, a sequence in which Bobby engages the services of a prostitute (Camp), is a pointless diversion that should have been scrubbed from the release print.

The film’s two greatest assets are the cinematography of Vittorio Storaro (The Conformist, Apocalypse Now), whose warm color palette and emotionally rich compositions bathe Café Society in a glimmering geniality, and the radiant performance of Kristen Stewart, who is virtually alone among these actors in finding her own means of expression and resisting the common temptation to deliver lines drenched with Allen’s unmistakable cadences and nuances. Carell also manages to mostly sidestep this pitfall in his endearing portrait of a power mogul from Hollywood’s Golden Age. Eisenberg delivers his best performance in a while, yet you can never escape the sense that he is just another stand-in for the Woodman himself. Parker Posey, who was so good in Allen’s last film, Irrational Man, is a bundle of affectation playing one half of a sophisticated, bicoastal couple with Paul Schneider.

Despite its lazily undercooked script and lack of final polish, Café Society will provide Allen’s fans with familiar delights. But as far as the Allen canon goes, it’s not likely they’ll ask the filmmaker to play it again, Sam.