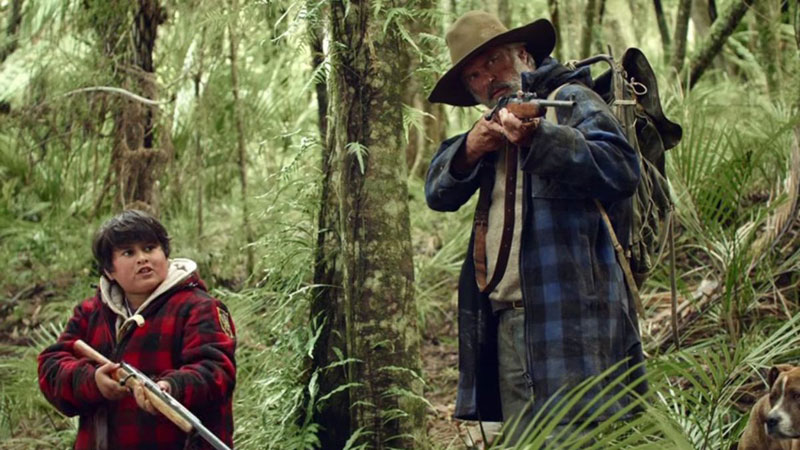 Hunt for the Wilderpeople

So you may have heard of this family-friendly tale of a troubled teen in foster care who takes up with an unconventional couple who slowly and with gentle ease turns his or her life around with some life lessons about, well, life. Throw in some coping skills training for good measure, with some twists and turns along the way, and you’ve got yourself a right mediocre film that sounds like it was birthed in a room full of lazy studio execs looking to make a quick return, but in the hands of ridiculously gifted New Zealand writer/director Taika Waititi (What We Do in the Shadows, Eagle vs Shark), Hunt for the Wilderpeople transcends its formulaic roots to become one of the funniest films of the year so far.

Based on the novel Wild Pork and Watercress by Barry Crump, Wilderpeople’s lad in question is Ricky (Dennison), shuffled around from foster home to foster home until he arrives at the farm of Bella (Te Wiata) and Hec (Neill). Bella is a sweet-natured soul who sees past Ricky’s gangsta-fronting, while Hec is a taciturn recluse, barely uttering a word. Tragedy strikes, and that sends Ricky and Hec into the New Zealand bush, on the lam from an increasingly unhinged Child Protective Services officer (House). The two bond in the wilderness, narrowly avoiding a massive manhunt to capture them, and randomly encountering a cast of characters exemplified by a brilliant cameo from Rhys Darby as “Psycho Sam,” a conspiracy theorist living in the woods. The duo become surrounded, and the film’s third act turns into a showdown as the forces against these two exiles from society draw closer and closer.

What elevates this conventional tale is how Waititi tells it. With sharp, nimble humor, and one-liners that come a mile a minute, Wilderpeople is a sweet story told with biting wit and an editing style that keeps things going at a rapid pace. And kudos to the music supervisor who thought to include both a Nina Simone song and Leonard Cohen, and making it work. Hunt for the Wilderpeople is a thoughtful and hilarious film with nuanced performances from the two leads. Waititi is tapped to direct the new Thor: Ragnarok for Marvel next year, and let’s hope his singular voice doesn’t get drowned in the abyss of blockbuster middle management.