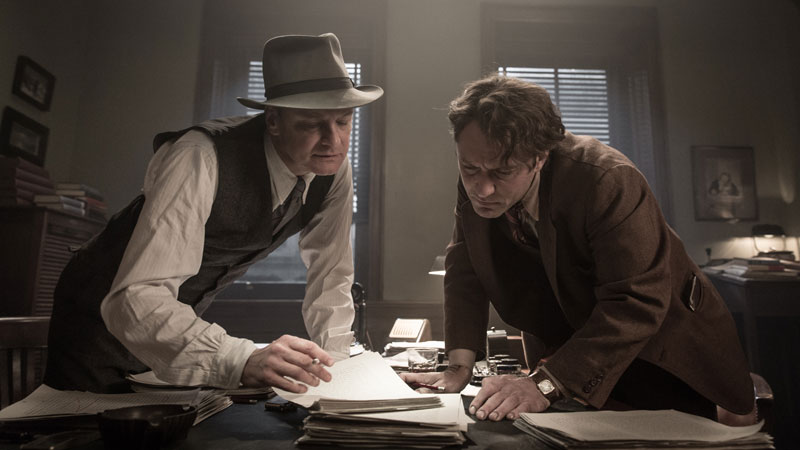 “A writer like Tom, I get once in a lifetime,” the editor Maxwell Perkins (Firth) insists, by way of explaining why he must neglect his family to devote all his time to coaxing a book out of the passionate, logorrheic Thomas Wolfe (Law). Posterity has proven that statement shortsighted: While at Charles Scribner's Sons, Perkins also championed F. Scott Fitzgerald and Ernest Hemingway, whose stars rose over the next century and change, while the more celebrated Wolfe’s dimmed. This fictionalized account of the editor and author’s creative collaboration on Wolfe’s first two books, Look Homeward, Angel and Of Time and the River, serves as a worthy reminder that Wolfe belongs in the first line of any lionizing of Great American Men of Letters. Amusingly, it makes that case with a cast comprised of three Brits and two Australians. (Laura Linney, playing Perkins’ wife, is the sole rep for Team America.)

Adapted by John Logan from A. Scott Berg’s biography Max Perkins: Editor of Genius and directed by Michael Grandage with the hots for slo-mo shots of feet, the film opens with the blunt assertion: “a true story.” Taking the filmmakers at their word, I have to assume Wolfe was a braggadocio and a bore. As played by Law, at least, he’s a Southern-fried carnival barker selling himself as the main attraction, with little suggestion of the innate charisma it must have taken to attract a much older (and already married) lover and benefactor, Aline Bernstein (Kidman), or to induce Perkins to become a father figure to him.

Perkins had no sons, a lack that forms the bedrock of Genius. In an elegant sequence of narrative economy, Grandage introduces the editor’s home life with Perkins opening various doors to rooms thrumming with the hubbub of his five feisty daughters and theatrical wife, until he finally settles in a closet to work in quiet. It’s no wonder he took Wolfe under his wing. Later, in the midst of a fight with his wayward protégé, he takes a stern-daddy approach: “Look at me and say yes.”

Firth, an actor who knows his greatest strength is in his gravity, single-handedly hoiks up this middling biopic on the strength of his Firthiness alone. The film’s most effective stretch starts with a scene set in a Harlem nightclub, where Wolfe takes the straight-and-narrow Perkins, who doesn’t like jazz. The band takes a straightforward spiritual and lets it rip. Wordlessly, Firth conveys a knot in his chest unfurling, going slack and swinging in his surprise pleasure in the song. The coda is just as minimalist: Back home in Connecticut, his body sighs with the relief of a tired, electrified tourist returning to routine. There’s little doubt Firth could work magic with a monologue, but the wordless kiss he plants on his wife renders it moot.

The father-and-son dynamic eventually hits a stumbling block over the public perception that Perkins masterminded Wolfe’s genius – a subject still up for debate. Genius doesn’t definitively come down on either side, but it’s worth considering how the film deals with long passages from Wolfe’s work. When it’s Law reading aloud in his awful cornpone accent, it sounds like curdled grits. But when Firth narrates, low and measured, the prose springs to life. I wouldn’t call Genius inspired, but not for nothing it inspired me to pick up Look Homeward, Angel for the first time. 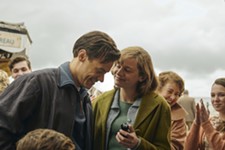