Given the choice between forced re-watchings – à la A Clockwork Orange – of the John Travolta/L. Ron Hubbard lovefest-cum-shitstorm Battlefield Earth and a return to the world of Warcraft, I’d take the gentlemanly way out and eat my Glock. Duncan Jones, who helmed one of the most unique sci-fi outings in film history with 2009’s Moon, has now delivered unto unsuspecting audiences a stillborn yet squallingly monstrous muddle of swords and sorcery and utter silliness, all of it allegedly drawn from the novels and "real-time strategy" games that preceded the planet’s most popular and long-running “massively multiplayer online role-playing game,” World of Warcraft. (In a nutshell, it’s Dungeons & Dragons gone global.) Warcraft the movie, awash in often awful CGI and taking itself far too seriously is, by film’s end, an inadvertently hilarious parody of the very fantastical tropes that made the online game/lifestyle so endearingly addictive. This isn’t Lord of the Rings, or even, heaven forfend, J.R.R. Tolkien’s as yet unadapted Middle-earth offshoot The Silmarillion, and trying to even think about Game of Thrones and Warcraft simultaneously could likely lead to instant and potentially permanent neurological meltdown.

That said, Patton, as the half-human, half-Orc warrior queen-to-be, does an impressive imitation of the Orion slave girl in the original, pre-Kirk Star Trek pilot “The Cage,” while Foster, light years afield from his bang-on portrayal of psychotropically droll wordsmith William Burroughs in Kill Your Darlings, bites down hard on his role as Medivh, the sorcerer guardian of the peaceful kingdom of Azeroth. He appears to be the only cast member not in on the joke (if there, indeed, is one) and acts as something of a dramatic counterweight to the wackiness around him. (This despite the fact that he’s frequently called upon to shoot blue lightning from his fingertips.)

I haven’t mentioned the plot of Warcraft yet because by and large it seems entirely incidental to what is, in effect, a lengthy setup to a presumed tentpole franchise. Clannish and muscle-bound Orcs, their home world dying, are led by a wily rogue named Gul’dan (Wu). Infected with the dread black magic “the Fel,” Gul’dan has decided to relocate the Horde by force to the aforementioned realm of Azeroth. The latter is populated by an alliance of humans, elves, and dwarves with guns and ruled over by good King Llane of Stormwind (Cooper, looking every bit an 8-year-old’s dream king). Somehow or other, it’s up to bold Sir Anduin Lothar (Fimmel) to rally the Azeroth’s scattered troops and bring a halt to the Orc invasion.

On the whole, you could posit Warcraft as a metaphor for our contemporary immigration consternation – but only as a drinking game, I think. Kudos for having several strong, independent female leads (of various hues to boot), but the bloated and blinkered Warcraft is officially, in my tally, the single worst film of the year across the genre board. Possibly it’s a genuinely mystical experience given enough hallucinogens and/or bong hits, but longtime World of Warcraft players should and likely will storm the cineplex gates, burn the castle down, and salt the earth (and screenwriters) from whence this abomination sprung. Me, I’m going to chill out and download 1982’s top-notch The Sword and the Sorcerer.

Editor's Note: A correction was made to this review since the original publication on June 10 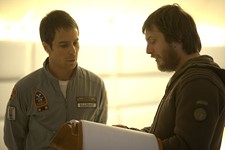 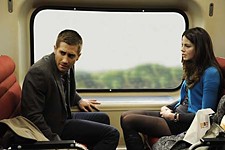 Source Code
These strangers on a train are players in a gripping science fiction roundelay. 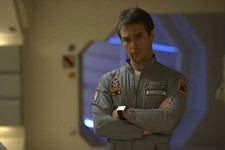 Moon
A man (Sam Rockwell) and his computer (voiced pitch-perfectly by Kevin Spacey) – alone on a moon-based work station of the future – plumb the depths of identity and inner space.