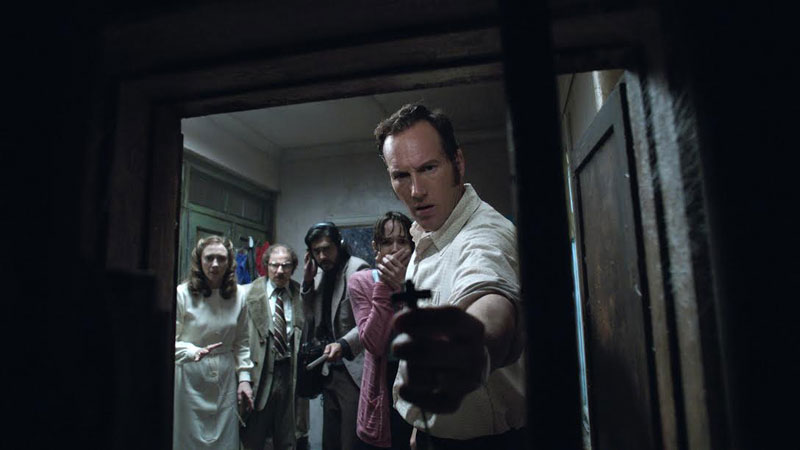 Based on the “real-life” Enfield Poltergeist that rattled Britain’s nerves from 1977 to 1979, James Wan’s follow-up to his 2013 husband-and-wife paranormal investigators creep-out, itself loosely based on the Amityville “horror,” arrives with a much larger budget and a lengthy profile piece and accompanying broody portrait in the Times, which begs the question “What does James Wan want?” Well, duh. Wan’s fans – and even those who aren’t so hot on the man behind the edgy goregasm Saw, Dead Silence, and two Insidious films – know all too well that Mr. Wan wants to give audiences 1970s-style spookshows, redolent of The Exorcist, Robert Wise’s underrated Audrey Rose, and similar disquieting fare. And to a large part, with The Conjuring 2, he succeeds. It’s a much subtler descent into the weird than the first film, which was burdened by a surfeit of hoary horror show tropes, among them slamming doors, shock cuts, and “gotchas” – graveyard gimcrackery that was old hat even when Wise used plenty of it in that great American haunted house story, The Haunting.

Refreshingly, there’s nary a cheap scare manifested in this Conjuring, although the unspoken corollary to that is that The Conjuring 2 just isn’t very scary, or even unnerving. And at over two hours long, it could easily shed 30 minutes or so and still feel bloated in psychical shop talk, if not in actual wraiths. (An aside: There’s a genuinely unnerving apparition decked out in a nun’s habit; the wicked, taboo-shattering genre sub-niche of “nunsploitation” hasn’t been revived as of yet, possibly because the current Pope seems so downright hip and with-it that one can almost visualize him cracking open a bottle of Trappist monk-brewed Westmalle Tripel and throwing School of the Holy Beast in an old Vatican VHS player. Probably not Ken Russell’s The Devils, though.)

Returning from exorcism round one are Wilson and Farmiga as ghost hunters Ed and Lorraine Warren. Semi-retired, they’re called back into action by the bedevilment of the Hodgson family. Harried and then horrified single mother Peggy (O’Connor, excellent) suspects a poltergeist when her preteen daughter Janet (Wolfe) begins levitating, foaming at the mouth, and then speaking in the raspy, vulgar voice of someone – or more likely something – that says it was the grotty council flat’s previous, now deceased tenant. The Warrens, a Catholic priest, and a television news team embark on getting to the bottom of all this unearthly tommyrot, but it’s Lorraine who finally figures out what’s actually going on.

Wan regular Joseph Bishara helps the proceedings immensely with a restless and occasionally appropriately jarring score that, on the whole, is more ominous than anything else in the film. While The Conjuring 2 is clearly on a slow burn, the final 10 minutes ramp things up to an unholy – and wholly unbelievable and contrived – degree, effectively canceling out the less histrionic and thus more effective sense of chilly unease of all that came before. Fie. Next up for Wan is the DC Comics' Justice League lead-up, Aquaman. One can only hope there’ll be no creaky phantasms 20,000 leagues under the sea.