Teenage Mutant Ninja Turtles: Out of the Shadows

I’ll admit it right upfront: The teenage fanboy in me who was 18 years old when Kevin Eastman and Peter Laird’s “heroes on the half-shell” made its microbudgeted (i.e., black-and-white) indie comic book debut way back in 1984 thinks that this slick, colorful, nonstop action and pizza extravaganza is, to put it mildly, “kickass.” Current, critical, and mature me thinks that this sequel to 2014’s Michael Bay-produced cinematic reboot is, on the other hand, something of a gorgeous, hot mess of CGI motion-capture and live action that, while true to the anarchic spirit of the original comics, is also 99% overkill in virtually all respects, from the convoluted story by writers Josh Appelbaum and André Nemec to producer Bay’s patented Platinum Dunes explodomania. (Current me also, albeit secretly, believes that TMNT: Out of the Shadows is – yeah, yeah –  exceptionally kickass, dumb fun. So much for cynical, jaded maturation.)

Having bested their mortal enemy Shredder (Tee) in their last outing, the four chopsocky-happy tortuga siblings are still residing in their secret lair in the sewers below Manhattan, although the fact that they can’t take credit for their prior exploits is obviously grating on them. A scene in which Michelangelo (Fisher), sitting 30 yards up in the scoreboard scaffolding, fumbles a slice of fried pie and fouls up a New York Knicks game is a telling indicator of familial tensions to come. When Shredder escapes from NYPD custody and hooks up with the delightfully ludicrous villain Krang (Garrett), who has a surefire-but-don’t-ask-me-what plan to destroy the world (m’wahahahaha, etc.), the Testudinian bros are called back into action, along with gal-pal reporter April O’Neil (a game Fox) and new cop on the block Casey Jones (Amell). In true Bay fashion, interdimensional danger and cityscape-obliterating CGI chaos ensue.

No groundbreaking cinemagic there, but Out of the Shadows’ oddball moments keep things weirdly surreal throughout. Krang, for example, resembles a cross between The Brain From Planet Arous and one of H.P. Lovecraft’s fever dreams, and Shredder’s new brute force sidekicks Rocksteady (Sheamus) and Bebop (Williams) are early on mutated into a lumbering rhinoceros and a snaggle-tusked warthog, complete with anger management issues and matching spiked leathers. None of this is Art, but you don’t go to a Turtle vs. Ninja grudge match – or a Michael Bay movie, for that matter – expecting Michelangelo di Lodovico Buonarroti Simoni’s David, do you? Those looking for big, dumb fun, however, will find plenty of it amongst TMNT’s shadows. 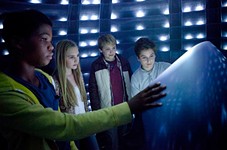 Earth to Echo
A trio of suburban kids befriend an alien entity in this Spielberg-influenced family film.