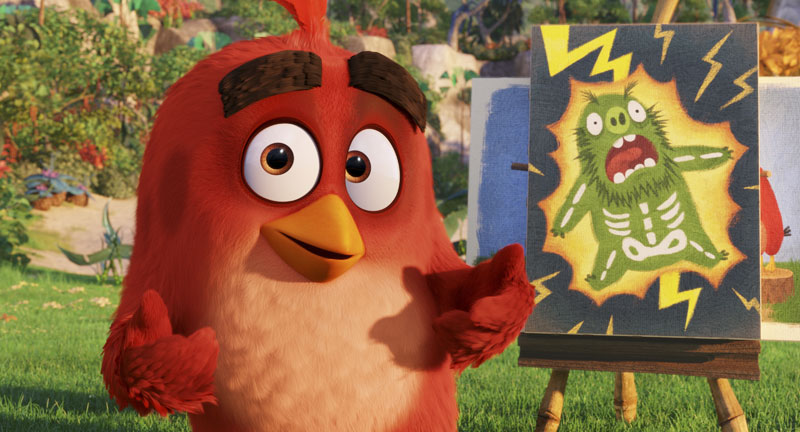 I’m not sure who requested this 3-D animated film version of the 2009 avian vs. porcine mega-app, but the seven-year gestation period is frankly a binary epoch in these madcap digital times, and while there are some well-done gags dropped, hurled, and slung during the film, it all seems too little, too late, too un-angry. Possibly the inclusion of angriest comedian alive Lewis Black might have avoided this, but instead we get the second angriest man alive, El Chapo meet ’n’ greeter Sean Penn, as fowl sidekick Terence, who expresses his irritation sans dialogue.

Having never particularly roosted myself in this Finnish/American-born gameplay to begin with, the whole mystery of why those birds are so angry never occurred to me. Longtime Simpsons and King of the Hill writer Jon Vitti provides a backstory that centers on Red (Sudeikis), a curmudgeonly, flightless waterfowl living on Bird Island. Red is one of the petulant few who don’t really care for all the shiny, happy peepers that surround him, and after a few too many tiffs he’s sent to an anger-management class led by ex-rager Matilda (Rudolph). Nestled uncomfortably alongside fellow bellowers Chuck (Gad), the explosive Bomb (McBride), and Penn’s aforementioned Terence, this trio of malcontents on an island paradise seem, well, little more than testy. Until, that is, the pigs arrive in steampunk pirate vessels led by Leonard (Hader). What’s up with this gift-bearing armada of bacon? Strangely, only Red surmises an ill-wind, so to speak, and fearing something, he seeks out Bird Island’s possibly apocryphal godhead, the Mighty Eagle (Dinklage), who turns out to be something of a letdown. And then there are all those precious, missing eggs ….

Angry Birds’ 3-D animation is perfectly honed for a game-based flick, but it can’t make up for a story that feels cobbled together from a thousand-million cellular thumbs. Maybe it’s supposed to be the enlightening tale of one bird’s self-redemption from neurotic negativity, but I just wanted to punch this film in the snout. I hear there’s an Angry Birds theme park opening in the UK. Maybe I can go burn it down while I’m waiting – hopefully – for Mario Kart: The Exegesis.