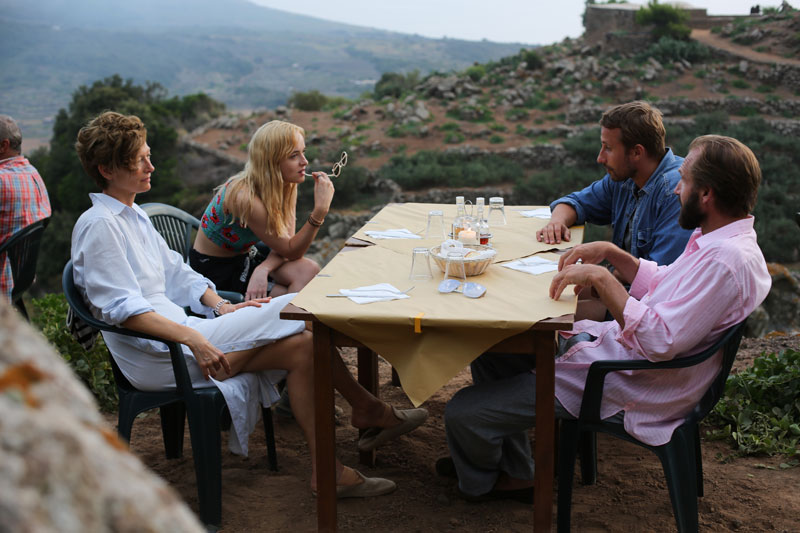 Tilda Swinton returns for another go-round with Italian director Luca Guadagnino, following the critical success of I Am Love, which was released in 2010. A Bigger Splash re-creates some of that earlier movie’s lush visual sensibility and unsteady emotional terrain, but in the end one might have hoped for the new film to, um …, make a bigger splash.

The cast is excellent; the villa on the Italian island of Pantelleria that the characters inhabit is picturesque, as are the environs; and the lazy days and the sun-dappled waters lull the viewer like a warm soak in the tub. But beneath the surface, unspoken tensions mount as characters mix and match, recalling memories from the past and conjuring the future. However, things never progress past the parboiled stage before the movie collapses into an almost farcical and expendable police story.

Tilda Swinton plays a David Bowie-esque rock star named Marianne Lane who has retreated to the island with her photographer boyfriend Paul (Schoenaerts) to rest her vocal chords. Apart from some whispered lines, Swinton’s performance, including an orgasm, is silent. Arriving to spoil their idyll is Marianne’s former producer Harry (Fiennes) and Penelope (Johnson), the daughter whose existence Harry only learned of a year ago. Harry is a boisterous whirlwind, inviting friends over to party and jumping naked into the villa’s pool whenever the spirit moves him. Harry and Marianne were a couple years ago, although it was Harry who introduced Paul to Marianne and gave their romance his blessing. Now he’s having regrets, while his Lolita-like daughter has designs of her own. The villa has become a hotbed, but the tone remains set on siesta.

The performances are so good, however, that you’ll probably be willing to indulge their futility. Fiennes delivers some of the best work of his illustrious career as an annoying yet tender old friend, and ingénue Johnson is certainly better served here than by Fifty Shades of Grey. Swinton is transfixing, as always, and the physicality Schoenaerts has displayed in previous roles is put to good use here. Aside from Fiennes (whose playful theatricality could put Lord Voldemort to shame), the actors underplay their roles, which keeps the pot on simmer but never provides a satisfying meal. The awkward tonal shift that follows the film’s climax adds to the parting dissatisfaction. Yet as a mood piece, A Bigger Splash leaves a lasting impression. 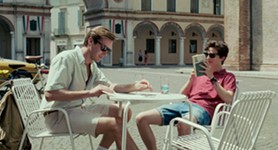