The First Monday in May

The basement placement of the Metropolitan Museum of Art’s Costume Institute of New York makes for a pretty irresistible metaphor for how high up on the priority list fashion once was for the Met. The “Is fashion fine art?” debate may rage on – or, if not rage, exactly, whatever it is snooty curators do in low tones – but there’s little doubt that fashion draws crowds, as evidenced by the 2011 Alexander McQueen retrospective that attracted a record-breaking 660,000-some visitors.

Every May, the Costume Institute mounts a major exhibition, ceremoniously ribbon-cut with the annual Met Ball, a themed party and fundraiser thronging with fashion designers, celebrities, and socialites – the “Super Bowl of social fashion events” declares Vogue fixture André Leon Talley. The First Monday in May tracks the months of concurrent planning leading up to 2015’s “China: Through the Looking Glass” exhibition and gala.

If somebody slammed a door shut on Andrew Rossi’s camera, you can’t tell from the edit; the film tenders the same confident, but not clubby, insider’s perspective as his 2011 doc Page One: Inside the New York Times. The crew tracks curator Andrew Bolton, a British expat in high-hemmed pants, as he nimbly negotiates a production of mammoth proportions, as well as legitimate concerns over colonialism and caricature in a Western-mounted exhibition of Eastern (or Eastern-influenced) culture. And then there is the Met Ball, just as obsessively curated by Vogue Editor-in-Chief Anna Wintour and her team. (Poor Josh Hartnett, who’s dismissed as a priority guest: “What has he done lately? Nothing.”) The whole film is a delicious excuse to gawk – at the magnificent costumes, at the diplomatic dance of museum personnel and party planners, and at the sumptuous squish of so many egos sharing space. 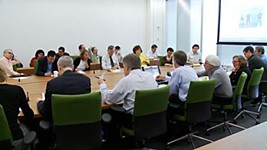 Page One: Inside The New York Times
The slow death of print media and the often shambling efforts of newspapers to reinvent themselves is one of the main topics of this documentary.

The First Monday in May, Andrew Rossi