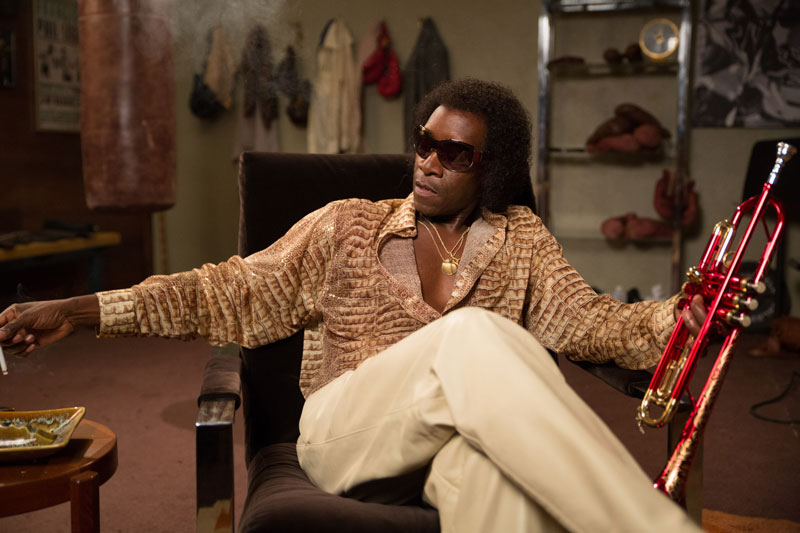 Miles Ahead is a fitting tribute to the legend of jazz innovator Miles Davis. The film is not a biopic where you’ll witness all the significant moments in the musician’s career and personal life, from birth to death. Nor is it a micro-focused drama that zeroes in on a particularly salient period or aspect of Davis’ personal history that might help elucidate the inner workings or thoughts of the living icon. More boldly, Miles Ahead is not even a re-creation of actual events, but instead a fictional fantasia that isn’t, but could be, believably true. The film is a riff, a controlled improvisation, that builds on known facts to speculate about the unknowable. Like a newly spun-off jazz riff, the venture earns applause for its audacious sprint into uncharted territory. Yet like many a jazz improvisation (even some by Davis himself), the practical payoff does not equal the soaring ambition. That’s the conundrum that characterizes Miles Ahead.

In addition to starring as Miles Davis, Don Cheadle makes his directing debut with this film, which he also co-wrote. Many years in the making, Cheadle’s labor of love was even helped along by a crowdfunding campaign in order to reach completion. His desire to fashion a biographical profile that does something other than burnish the legend is commendable. And the actor’s ability to re-create a plausible physical and vocal likeness of Davis is exemplary, right down to the musician’s famous rasp. It is one of the best performances of Cheadle’s career, made all the more remarkable because he’s directing all the scenes, as well. Still, the fabricated story that propels the movie, though tenable as events that might have occurred, is insufficient to seize our attention. It’s like a bent note that never finds its correct register.

The story is set in the late Seventies during a period of Davis’ self-imposed retreat from the industry and society, a time during which drugs and creative inertia appeared to rule his life. But the movie also bounces back in time, using flashbacks to the Fifties and Sixties that highlight his abiding love for his first wife, Frances Taylor (Corinealdi), who abandoned her dancing career for their marriage and was rewarded, in return, with Davis’ notorious physical and emotional abuse. A knock on the door from Dave Braden, an unpredictable character played with zesty Seventies élan by Ewan McGregor, sets the plot in motion. What follows includes gunplay, car chases, stolen audio tapes, drug procurement, a mendacious record-company exec (Stulhbarg), and a wannabe jazz star (Stanfield). As events escalate, we begin to realize that what we really want is not a caper, but to learn the secrets that might elucidate Miles Davis’ musical genius. Unfortunately, instead of delivering something that’s kind of blue, we wind up with something else that’s vivid purple.