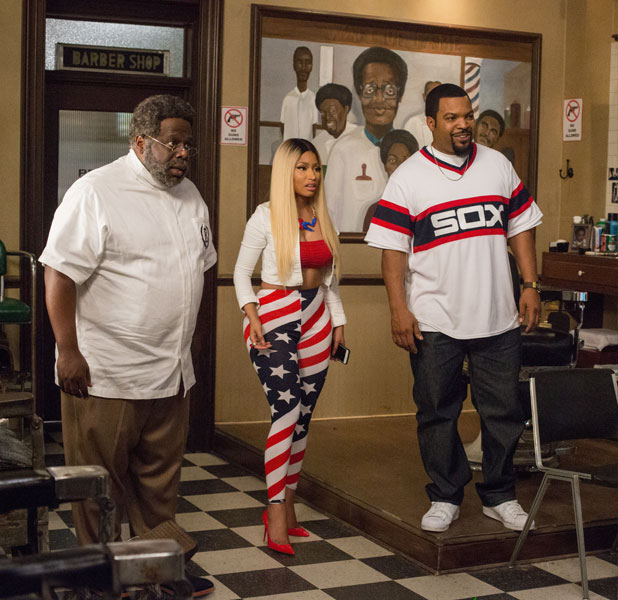 Barbershop: The Next Cut

They’re back, sittin’ around and shootin’ the shit again at Calvin’s Barbershop on the South Side of Chicago in this serious-minded but laugh-out-loud second sequel to the underrated 2002 comedy about making a living with a little off the top. Like its predecessors, Barbershop: The Next Cut (the title could use a trim) has a big-hearted sense of community, one now threatened by the senseless daily violence plaguing the streets of the Windy City. At one point, the employees and hangers-on at the shop try to one-up one another in a can-you-beat-this exchange about their recent mugging and robbery experiences. It’s funny, and not funny, at the same time. As crime escalates on the outside, Calvin and company decide to take matters in their own hands (scissors in one, comb in the other) by negotiating a weekend cease-fire with the boys in the hood and offering free haircuts and blow-dries during the 48-hour period. The film’s idealistic notion of achieving harmony one snip at a time may strike some as naive, even corny, but hey – you have to start somewhere.

The acting ensemble is impeccable, with Ice Cube again at its solid center. As old-timer Eddie, Cedric the Entertainer is entertainingly irascible, trading the character’s politically incorrect opinions about Rosa Parks and Rodney King in the original film (remember the uproar those remarks triggered in the black community?) for chauvinistic opinions about African-American women, who (much to his chagrin) no longer know how to iron a shirt. (The actor’s apparently glued-on salt-and-pepper beard should get its own screen credit.) On the other side of the shop in the adjoining salon, Minaj’s Draya mouths off right back while working those abundant breasts and ass for all they’re worth, a little girl lost in an inflated body. (Minaj’s booty, displayed to full effect during a sidewalk twerk, also deserves its own screen credit. And an agent.) The comic performances, such as Smoove’s turn as a modern-day snake-oil salesman and Morris’ sweetly metrosexual newbie behind the barber chair, are nothing less than delightful. What most captivates is the rhythm of those scenes in which the characters mount the soapbox to share stinging observations on a variety of topics in an often hilarious back-and-forth battle of words. It’s like listening to a finely calibrated piece of music. When it rolls, Barbershop: The Next Cut lets its hair down like few others do.